2 lesbians spread sin by the altar 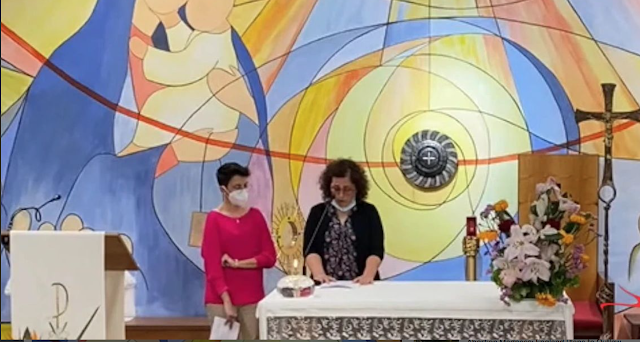 Daniela and Ariana spread homosex propaganda on 17 May, standing at the Novus Ordo table of Mary of Mount Carmel Church in Montesilvano, Pescara, Italy.
The two were promoting "lesbian love" which consisted of "hours of hugging", sweet eyes and tender hands. Directly behind them was the tabernacle and a monstrance, ready for a subsequent Exposition of the Blessed Sacrament.
Daniela admitted that she used to fornicate with men in the past, but it "didn't work out". Now she believes that "the Lord" [of Hell?] made her find a lesbian accomplice. Father Valentino Iezzi "accompanies" the two "as a couple" to nurture their "love" [=sin].
After the two, Iezzi invited parents of homosexuals to promote vice. The show was part of a propaganda event against "homo-trans-phobia" and against the Catholic faith, supported by the Archdiocese of Pescara-Penne (Archbishop Tommaso Valentinetti, 70).
en.news