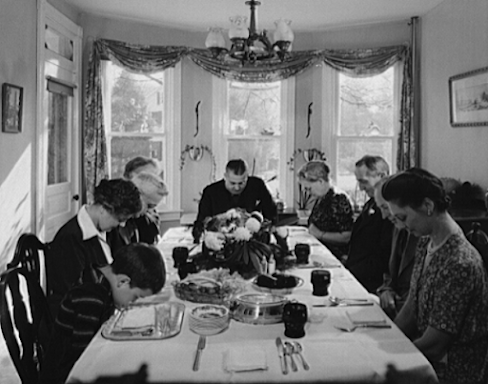 Luis grew up in Italy and since boyhood had a strong call to be a monk. He always wanted to give himself totally to the Lord. In his twenties, he didn't realize his vocation but still hungered to be a man of the cloth. Instead, he went to America for a good job. He met a girl who became his love, even though she was not Catholic. She seemed - or at least gave him the impression - that she was amenable to the Faith. Then planned to wed and she gave her consent to their children being raised Catholic.

After they were married, they had three children, but Luis's wife would only allow him to baptize one child.  The other two were without the saving waters of baptism. Next, his wife took a lover. Luis forgave her but she continued in this extramarital affair. Divorce loomed. But Luis's mother-in-law suggested they have one last Thanksgiving dinner. Poor Luis did not know the dastardly plan that his soon-to-be ex mother-in-law had for him. A demon would reveal it later.

When he was newly divorced, Luis had health problems, money constraints and difficulty praying. This was most unusual for him; this troubled him most, he'd always held prayer dear. He had outbursts of anger. Back in the old country, his devoted Italian mama was praying for him, and she thought a priest should pray over him.

Luis consulted Adam Blai, expert in demonology who also assists at exorcisms. They started their prayers for Luis with the Litany of the Saints and Luis's reaction was like that of a someone allergic to the invocation of saints; his body became taut, his hands became tight fists, his hands shook and he screamed. When the priest present saw this, he performed tests for possession. Luis spoke Hebrew and German, which he had never studied or heard, yet this sudden ability with unknown languages is a hallmark of demonic possession. Demons are fallen angels who can speak many if not all languages, and when they inhabit a person, they usually reply in the language that has been used to pose a question. Then when they put relics near Luis, he gave very telling details and even named some of the saints.

The priest had enough data to prove a case of possession, but they also asked for a psychological assessment from Luis's physician to confirm his issues were not mental illness. Then they performed a solemn exorcism. Luis began to act like he was going to vomit. According to Blai, it is more usual for people to cough when they are being exorcised. Luis emitted a brown goo that had a foul stench. Bear in mind this was some time after Thanksgiving and yet this had cleaved to him and not gone through the normal digestive process.

The demons were brought to heel and forced to tell as to how they invaded Luis: they revealed his ex mother-in-law had cursed the gravy he had eaten at Thanksgiving. These were a most bull-headed bunch of bad angels, they said the powers of Hell were concentrating their efforts on staying inside Luis because he had a vocation to the priesthood.

Luis's story follows a trend that people with vocations - be they men or women - are often the ones who are most savagely attacked by the devil so they cannot pursue their calling. It also speaks to how very important it is to say grace before meals, to ask God's blessing on our food and drink. Luis's possession is a salutary warning against food that carries a curse, but as he found out, food can be cursed in secret and then served. It is best to be cautious about partaking in meals which have been prepared by anyone who has a history in the occult, or who has bad intentions towards their guests. It is instructive that Luis was manipulated by the same people who didn't want his children to be baptized.

This post was informed by Adam Blai's The Exorcist Files