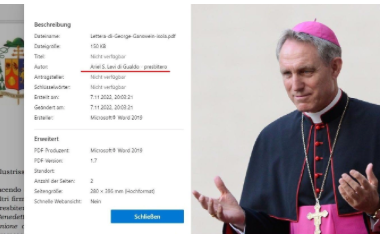 Archbishop Gänswein’s (False) Letter: The Digital Clues to the Origin of the PDF and the Forgery

Dear friend and foes of Stilum Curiae, we receive and publish this article by Andrea Cionci, which follows the clues necessary to identify the origin of the false letter that claimed to be sent from Archbishop Gaenswein to Don Minutella. Naturally, since the article directly calls into question Don Ariel Levi di Gualdo, Stilum Curiae declares that it ready to publish any reply he may wish to make. Enjoy your reading

Yesterday afternoon, on Radio Domina Nostra, the point was made here about the grave affair of the letter attributed to Archbishop Gaenswein. On the morning of November 8, Don Minutella made public this registered letter he received on the Archbishop’s stationery in which it says: “The Pope emeritus has always celebrated the Holy Mass ‘in union with Francis our Pope,’ his Successor, to whom he has publicly promised ‘devoted and unconditional obedience.’ You are in grave error, as is proven by the penalty of dismissal from the clerical state that has been imposed on you and which the Church inflicts only very rarely. The Holy Father emeritus assures you of his prayers for your repentance.”

While the Sicilian theologian [Don Minutella] expressed some doubts about its authenticity, Don Ariel Levi di Gualdo immediately published an exclusive at his blog here, triumphantly, according to which Gaenswein confirms precisely the same concepts that Don Ariel has been promoting for some time, and very emphatically. On his blog l’Isola di Patmos, Levi published the PDF of this letter, claiming that he had received it a few hours previously from “a source which would never give its name.”

Immediately after this, your writer, at RomaIT, showed how the letter was blatantly false due to the non-existent sender “Sg. Pe” – an obvious ploy to avoid making the Vatican post office suspicious. I was immediately mocked by Giovanni Marcotullio at Aleteia, who called me “the conspiracy-theorist scribe of Don Minutella who denies the evidence” Shortly afterwards, however, Archbishop Gaenswein himself denied having written the letter at Kath.net, saying not only that the letter is a fake (as a physical document), but also that it is a lie, that is, that its contents also are false: meaning therefore that Benedict does NOT celebrate in union with Francis and Don Minutella is NOT in error, nor are the other priests of the Sodalizio Mariano.

Once again at RomaIT, your writer produced extensive documentation on how the fake was produced, downloading the signature of a letter written by Gaenswein in 2014 that may be found on the internet and reviewed it with a marker.

In addition, however, Kath.net (English translation here) also ended its piece with a strange consideration: “Furthermore, the recipient of the letter must not automatically be the one who has forged it.” Marcotullio sticks with this silly argument in his update of his article, promoting the possibility that it may have been Don Minutella himself who falsified the letter.

Among those who are loyal to Benedict XVI, however, there are some IT experts who, by downloading the PDF from Don Levi’s website, have recovered the data from the file, which led them to the identity of the writer of the letter.

It is revealed in this video (at the 44:00 mark) that the PDF published by Don Ariel was produced on November 7 [2022] at 8:03 P.M. with a Microsoft Word program licensed to “Ariel S. Levi di Gualdo – presbitero.” On November 9, after the first doubts appeared in the press, at the L’Isola di Patmos website link, the PDF was replaced with another that this time bears the words “copy of the original” in yellow but which, in the properties of the document, again identifies “Ariel S. Levi di Gualdo – presbitero” as the “author.” The Microsoft Word license has had this header since at least the end of 2021, as is shown in another file, the “Biography” of Don Levi that was published some time ago on the website.

An IT specialist explains, in a brief video here (at the 54:45 mark), how the two PDFs of the false letter were still present on the L’Isola di Patmos website on November 11.

And so, these are the facts. We will stop here. It will perhaps be up to the investigators to find out who this “Mr. X” is, this mysterious “source” who, according to his own statements, Don Levi will perhaps continue to cover up, never revealing his name, even in the presence of a double criminal offense: substitution of person (art. 494 of the Italian Criminal Code) and false writing.

We are certain that some of the “una cum-Bergoglian-sedevacantists” will continue to support theories of the sort that suggest Don Minutella must have purchased a PC in 2021, illegally registering it to Ariel Levi di Gualdo in order to use it a year later in order to send to Levi himself a false letter from Gaenswein in such a way that Levi would unknowingly send it to Don Minutella, so that Don Minutella could lie about it thanks to his “scribe” Cionci.

No doubt they will even make this argument – but then … if the forger was really Don Minutella, and since Don Ariel says that he knows the name of his source… why doesn’t Don Levi mention his name, if he has really been made the object of such an ugly prank?

In short, this disheartening, tragicomic episode is a warning to all those who continue to linger in lies, in obstinate doubt, in malicious plots, in harsh criticism, in complicit silence, in convenient compromise, and in hatred toward the true Vicar of Christ Benedict XVI, who is in an impeded see, and who – obviously – celebrates Mass in union with himself, that is “with me your unworthy servant.”

We can categorically affirm this reality precisely thanks to this letter, read in union with two declarations that have been made by Archbishop Gaenswein. The first one is here in his response made a few weeks ago to the Bergoglian priest Father Willibald Zenkert: “Pope Benedict has never mentioned any other name in the Canon of the Mass. He has never named himself in the Canon.”

And Benedict does this because he is the true pope, who has remained in an impeded see, still possessing the munus but without retaining the ministerium. And Bergoglio is an antipope.