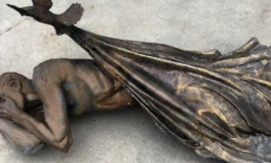 Another monument to the ideology of pauperism will appear in the Vatican, while Bergoglio and his allies use the St. Peter's Pence to defend homosexual clerics in the courts, in investment disasters or financing movies like that of the sodomite Elton John.

It is life-size bronze and was made by regular Canadian artist Timothy Schmalz, who describes himself as "an artistic soldier" of Francis.

It depicts a homeless man covered by a blanket and a flying dove.

This motif is very appropriate, since St. Peter's Square has long been taken over by vagrants who urinate there. But didn't bergoglio have some toilets and showers built for the case? In spite of this, he spends the money of Catholics boasting about honoring the poor with something useless, although he does not hesitate to distribute money among trans prostitutes when "work" is scarce.

He forgets that the greatest poverty is not knowing Jesus Christ, but as it is known, Bergoglio not only does not announce it in his "apostolic" trips but he has dedicated himself from minute 1 to demolish His Doctrine among the People of God and implies, whenever he can, that all religions are good.