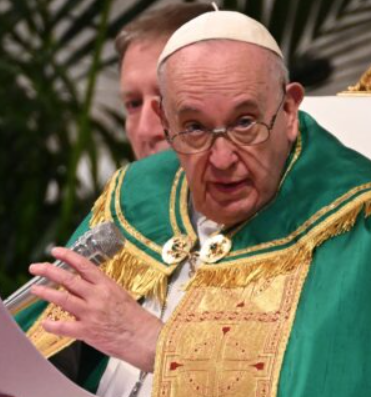 The pope sent out a series of mixed messages in his yearly homily for the World Day of the Poor, spreading intense fear of possible climate change disasters yet cautioning against “prophets of doom,” the “sirens of populism,” and self-interested “false messiahs.”

“Let us light candles of hope in the midst of darkness,” the pontiff urged. “Amid dramatic situations, let us seize opportunities to bear witness to the Gospel of joy and to build a fraternal world, or at least a bit more fraternal.

Francis has frequently railed against a “politics of fear” as an enemy of the democratic process but has also stoked fears of an impending climate apocalypse in order to incite people to action.

In a 2016 speech delivered at the Vatican, he denounced making political decisions based on fear, because fear “weakens and destabilizes us, destroys our psychological and spiritual defenses, and numbs us to the suffering of others.”

At the same time, the pope has asserted that humanity has only “ten years” to restore the earth’s ecosystem.

In his 2021 Message for the Launching of the United Nations Decade on Ecosystem Restoration, Francis insisted that the “current environmental situation calls us to act now with urgency.”

“We risk floods, and hunger and severe consequences for ourselves and for future generations,” the pope warned.

It is time to act urgently “to restore the nature that we have been damaging and exploiting for too long,” Francis stated. “Otherwise, we risk destroying the very basis on which we depend.”

We have “ten years,” Francis declared, “to restore the ecosystem, which will mean the integral restoration of our relation with nature.”

This past week was replete with warnings from “prophets of doom” during the U.N.’s COP27 climate summit in Sharm el-Sheikh, Egypt.

First among them was the U.N.’s very own alarmist-in-chief, António Guterres, who warned participants in the COP27 meetings that the world is on “a highway to climate hell” due to humanity’s “fossil fuel addiction.”

On Saturday, Guterres added that global leaders “need to put the world back on track to limit global warming, and save our glaciers and the biodiversity that depends on them.”

“Without faster, bolder Climate Action, the glaciers that cap Mount Kilimanjaro in Tanzania will be gone by 2050,” Guterres alleged.