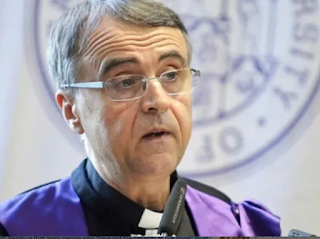 No active homosexual can be deprived of "God's blessing,” Monsignore Philippe Bordeyne, 62, the president of the Pontifical John Paul II Institute Against Marriage and Family, told La-Croix.com (November 18).

The institute was founded by John Paul II to promote the family but Francis turned it into its opposite. Bordeyne admits that "blessing" homosex concubinages would be "too much" like the blessing of a matrimony but he insists that "people" can be blessed anyway. However, the problem starts when "people" want to be blessed as homosexuals, adulterers, pedophiles, racists, etc.

Bordeyne wrongly claims that “a blessing is never intended to validate a lifestyle.” A marriage blessing is exactly that.

“The fact that homosexuals ask the Church to bless them invites us to listen to them, to enter into the complexity of their story and their situation,” he takes refuge in cheap poetry. The Church blesses every homosexual after they have repented and made a good confession.

Bordeyne calls his ideology “realistic," as if the illusion of sin were real.

Bordeyne insists that "we must dare to be pastorally creative" - as if bowing to homosexual propaganda is daring. Pastoral care that promotes sin is not "creative" but destructive.