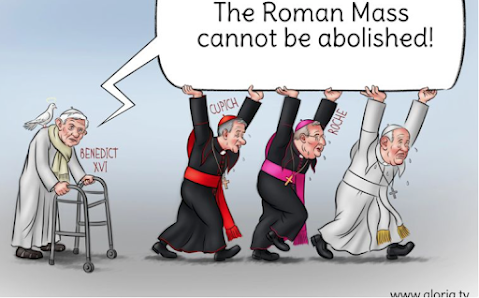 Francis' Traditionis Custodes has led to difficulties and persecution, but lacks force because it is based on reasons that are "not true and just," Cardinal Burke told NcRegister.com ( November 4).

Burke stresses that it is not true that the Novus Ordo is the only valid form of the Roman Rite, because previous popes, including Benedict XVI, have acknowledged that it "has never been abolished".

The claim that Roman Rite Catholics would "reject" [failed] Vatican II and are "divisive" is false for Burke. On the contrary, Catholics are "loyal" to their bishops and the Pope and therefore "understandably deeply hurt by the harshness" of TC and its implementation.

The pain of Catholics is "understandably intensified" when they see the German Synodal Way and others openly deviating from Church teaching with impunity, while they are treated as "harmful to the Church" because of their "deep appreciation of the classical Roman liturgy".