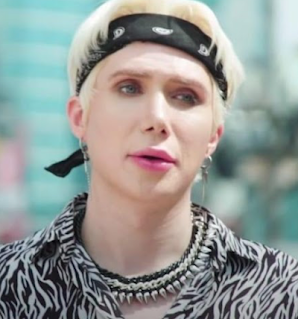 As more men and women publicly share their stories of how they “de-transitioned,” or reversed their gender transitions, one man is talking about how his experience led him to Christ.

British singer and viral social media influencer Oli London credits the Bible for the new life he is living and for being able to “accept” himself for the way God made him.

“This actually kind of saved my life. It’s brought me back to who I am as a person, finding God,” London told CNA Thursday.

From the age of 13, London told CNA, he struggled with body dysmorphia and “identity issues,” leading him to hate the way he looked. He experienced bullying in adolescence for being overweight.

London, who is now 32, resides in London, England.

“I’m sure a lot of young people can identify with that. At school, sometimes, we all get bullied for the way we look or who we are,” London said. “But that’s kind of what spurred my journey to begin with — just having that kind of hatred of myself.”

After moving to South Korea to teach English in 2013, London says he was “bombarded” with messages about how plastic surgery could transform those who were “deemed not beautiful.”

South Korea is the “plastic surgery capital of the world,” performing 24% of the world’s cosmetic alterations.

London began consulting with plastic surgery doctors to change the way his face looked, going on to eventually have 32 surgeries.

“That is kind of the reason I had problems with my identity. I wasn’t sure: am I meant to be feminine? Am I meant to be a boy? The more surgery I had, the more feminine I wanted to look.”

A recent Fox News story said of London that “his desire to look Korean stemmed from living in South Korea and his love for the people and culture.”

Desire to return to ‘how God made me’

London said by early 2022, he started to be “happy” with the way he looked after having multiple surgeries, including chin surgery, a facelift, a neck lift, eye surgery, and shaving his cheek fat and forehead bone to make his face appear more feminine.

“When I saw the results of this, I was super, super happy. I thought, ‘you know what, I’m better. As a woman, I look more beautiful. I think I will feel happier. Maybe that’s the reason I had all these identity struggles my whole life, [because] I am trapped in the wrong body.’”

That’s when London started his social transition into a woman, wearing female clothes, shoes, and makeup. But he said that he “didn’t feel right.”

Then, in August, London walked into a Catholic church.

“Three months ago, I started reading the Bible after visiting a Catholic church,” London — who was formerly atheist — said, adding that everyone’s welcoming kindness encouraged him to keep attending.

London recalled that he spoke with a priest after the service who gave him a Bible.

“I started going a few times a week. I started reading the Bible myself at home,” he said.

“It made me [realize]: ‘You know what, God made me a certain way, God made me who I am. Why on earth would I want to change that? Why am I going for all these extreme procedures? This is not how God made me, this is not what I was meant to be in life.”

London said that his experience at the Catholic church made him realize that changing his appearance was not important — what was important was “on the inside.”

“Letting Jesus and God into my heart [has] saved my life. It’s brought me back to who I am as a person, finding God.”

His next plan? To get baptized.

“I consider myself Christian but leaning towards more Catholic. I would like to get baptized soon,” London said.

He added that he would like to get baptized in America by a “very well-respected priest [who] has a good connection with God and [a] strong belief system.”

London believes that baptism will help heal him from the past “traumas” of his surgeries and from the “mentality” of living as a trans person.

“One of the things that I liked the most about the Bible is the story about when Jesus treats the leper,” London said.

“This person was rejected by society. Nobody would go to this person because they thought they were infected. And then Jesus … wanted to help this person. He washed them.”

Since London has spoken out about his story on social media and in interviews, he said he’s received “thousands and thousands of messages from Christians and Catholics” praying for him and sending encouragement.

He urged Catholics to reach out to those with gender dysphoria, especially children, and invite them to church.

“If you can give them some moral support and pray for them, I think that will help them incredibly and help them turn their life around. Most of these kids are lost, they’re confused,” he said.

“Suddenly you get a kind Christian person saying, hang in there, stay strong. I’m really grateful to the Catholics and the Christians that have done that so far.”

As for his future? London said he plans to use his platform to help people with no faith, particularly teens and children who struggle with gender dysphoria, to accept themselves for the way “they were intended by God.”

“I want to try and spread this message of self-acceptance, [that] we are the way God made us. Let’s accept that. Let’s help them realize that.”

In London, England, where London currently lives, the country’s National Health Service halted transgender treatments for children this month after determining gender dysphoria is most often a “transient phase” and that puberty blockers and hormone drugs have severe health effects.

London “thank[s] God” he did not go on any feminizing hormones or have any other surgeries.

“Kids from the age of 12 are being pushed onto puberty blockers and hormone replacement therapy. I don’t believe that’s right. Kids need to be children,” he said.