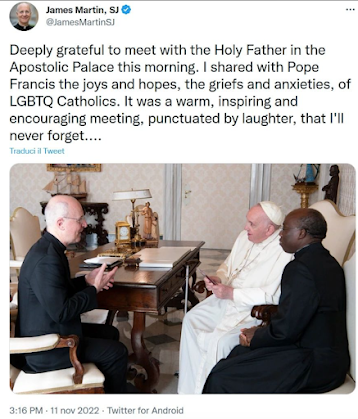 Martin wrote on Twitter.com that he is “deeply grateful” to meet with Francis in the Apostolic Palace for 45 minutes.

They spoke “about the joys and hopes, the griefs and anxieties, of LGBTQ Catholics.” The talk among these warm people was “a warm, inspiring and encouraging meeting.”

Meanwhile it is more than six years that Francis received the Dubia but not the Cardinals who wrote them. He also declined to meet with Cardinal Zen.