Francis brings us back to the heresy of heresies 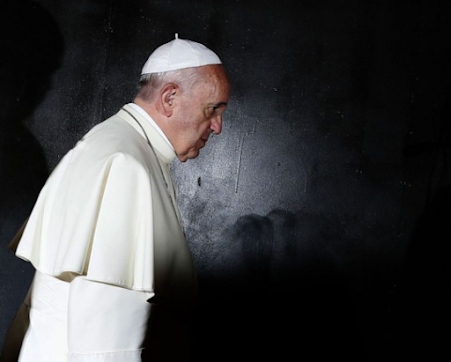 STEPS TOWARDS A ONE WORLD RELIGION

Is Francis leading the Church down the heretical path of the one-world religion of unity?

Francis traveled to the Persian Gulf Kingdom of Bahrain from November 3-6, 2022. There he participated in a dialogue forum entitled "East and West for human coexistence". He accepted the invitation of the secular and religious authorities of the country, King Hamad II of Bahrain and the Council of Muslim Elders. The Priestly Fraternity of St. Pius X (FSSPX) clearly criticized Francis' speech.

On Friday, November 4, 2022, Francis delivered a speech to this Council of Muslim Elders at the Sakhir Royal Palace Mosque in Awali that deserves to be remembered. The Pope was received for the first time by the Grand Imam of Al-Azhar, Ahmad al-Tayyeb, with whom he had signed the controversial document on human brotherhood for world peace and common coexistence in Abu Dhabi on February 4, 2019. According to the communiqué, this is a large-scale deployment of dialogue.

For the Abu Dhabi document, Francis sometimes reaped severe criticism in the Catholic world, which the Austrian philosopher Josef Seifert summed up in the sharp formulation that the document contained the "heresy of heresies." Auxiliary Bishop Athanasius Schneider also commented on it at length.

What conclusion does Francis draw from that criticism? Apparently none, or in other words, he considers it irrelevant, at least not important enough to change his course. In Bahrain, he followed up.

In his speech, which was read, Francis said a word that sounds like a denial of the kingship of our Lord Jesus Christ. This is the text:

"In the face of an increasingly wounded and torn humanity, which breathes with anxiety and fear under the garb of globalization, the great creeds must be the heart that unites the members of the body, the soul that gives hope and life to the highest aspirations."

The Fraternity of St. Pius X (FSSPX) news site wrote in this regard:

"There is one Lord of humanity and one King who unites the members of his mystical body; one Spirit who is like the soul of that body; and one God, Jesus Christ, who can "give hope to the highest aspirations": salvation and the eternal vision of God that will fulfill and surpass the highest aspirations imaginable. And all people are called to be part of the mystical body of Christ by the grace of God. No other "religion" or so-called religion can give "hope" or "life to the highest aspirations" of man. None of them can be a "heart uniting the members" but by a mere human union, totally incapable of realizing this marvelous union among its members by grace."

No other religion "was "founded by God:" They are the fruit of human invention, and propagate doctrines incompatible with the immutable truth which is Christ, the eternal Word of God."

How then could these religions be "the heart that holds together the members of the body"?

On this, the Pius Fraternity:

"The thought behind these words is always the same: all religions must constitute a movement for the spiritual animation of universal democracy, as Father Georges de Nantes rightly said.

All this can only lead to a profound indifferentism, to a distancing of Catholics from their religion, which, according to them, should be more and more only a copy of civil and political society, sprinkled with a pseudo-characterism with tints of naturalism.

Usquequo Domine? How much longer, Lord?"

Theologian and blogger Maria Guarini also pointed out that Francis was not affirming for the first time that "we are all brothers" because we are God's creatures. However, Christians are children of God, not just creatures, because they have been adopted by God. Therefore, if it is affirmed that "all" are "children of God," it is a false doctrine that affirms something it is not.

"It is to deny Christ and his redemptive act, because we are children of God through Jesus Christ."

This brings us back to the "heresy of heresies," the denial of the deity and redemptive act of Jesus Christ.