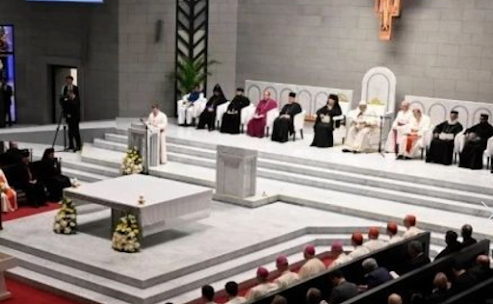 Francis opens the churches to the Protestants, that is, he invites them to profane the Houses of God, since this heresy discards the miracle of transubstantiation; that is why they will not reverence Christ, God, in the tabernacle, the soul of every Catholic church, in His own Houses when they use them. Moreover, Lutherans and other denominations that emerged after the Reformation, mock the worship we owe to Our Lady, especially as Coredemptrix, and lack the sacrament of Confession and priestly Orders, among other disastrous things such as not recognizing the papacy. It could be the first step to unite both rites.

Francis never tires of humiliating the Church, implying that it is the same thing to celebrate the sacrifice of the Cross as a Protestant supper, which lacks the redemptive value of the true Mass with its infinite merits. And he wants to make this very clear in the eyes of Catholics who might well think that it is indifferent to attend one or the other worship, diverting them from their religion, besides ending up dispensing with Confession and Communion. This is the legacy of Francis that many do not want to see and follow him like sheep to the slaughter, that is, to Hell. Because it will also be evident to Protestants that it is not worth converting to Catholicism if both rites are comparable.

But then, since the persecution begun with Traditiones custodes, Bergoglio has forbidden the use of parishes for the celebration of the usual Mass to traditional Catholics.

It was during his Nov. 4 address to an ecumenical gathering in Bahrain that Francis encouraged his audience to maintain the "good custom" of making church buildings available to other communities" (also those who deny Jesus Christ, such as the Jews?) for the worship of the one Lord."

He added that "the praise of God" is the "spiritual cenacle" to make unity among Christians. This is the same Francis who is banning the celebration of the Roman Mass in parish churches.

It is clear from his words that he sees the Novus Ordo as just another form of Protestant worship, while opposing the Catholic liturgy.