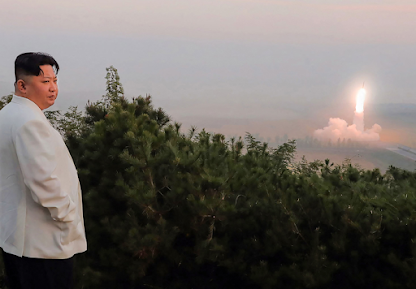 North Korea has launched an intercontinental ballistic missile (ICBM) as part of a large-scale show of force against the ongoing war games between the US and South Korea, according to Seoul’s armed forces.

The South Korean Joint Chiefs of Staff said the military detected “what is presumed to be a long-range ballistic missile launch from the Sunan area in Pyongyang” early on Thursday morning, noting that two additional short-range missiles followed about one hour later.

After analyzing details of the launch, the military added that the weapon traveled a distance of around 760km (472 miles) and reached a top speed of Mach 15. However, a defense source later told Yonhap that “the missile seems to have failed in normal flight” after its second-stage separation.

In a statement later on Thursday, the Joint Chiefs said “Our military has beefed up surveillance and vigilance” and would maintain a “readiness posture in close cooperation with the US.”

Thursday’s launch marks the first time Pyongyang has fired an ICBM since May, though it comes amid a record number of missile tests overall this year. The DPRK has also unleashed hundreds of rockets, missiles, and artillery shells into the sea in recent days as a demonstration to Washington and Seoul, which are in the middle of some of their largest air drills ever.

With tensions soaring on the peninsula, the North has repeatedly condemned the exercises as a rehearsal for a full-scale invasion, even suggesting earlier this week that Washington could be preparing a nuclear attack. The US and South Korea, meanwhile, have denounced each missile launch by Pyongyang as a dangerous provocation and have vowed to continue strengthening military ties.