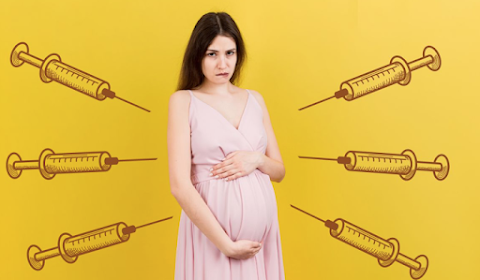 A study published by the Federal Institute for Demographic Research confirms what critical observers have known for some time: mass vaccinations caused a massive drop in the birth rate. Nine months after the start of the vaccination campaigns, there was also a considerable drop in live births in Germany. Although the temporal connection cannot be denied, there is now an obvious struggle to find the causes of this development that have nothing to do with a fertility-damaging effect of the experimental vaccines.

The Federal Institute for Demographic Research (BiB), a German federal institute in the portfolio of the Federal Ministry of the Interior, has the task of investigating the causes and consequences of demographic change and advising the government and ministries accordingly. This is demonstrated by the study "Fertility declines near the end of the COVID-19 pandemic: Evidence of the 2022 birth declines in Germany and Sweden": The declining birth rate following vaccination campaigns is welcomed by German politicians.

Not only the German data support this, but also the Swedish data. In both countries, the so-called pandemic itself did not show any influence on births. While in other countries a slight decline already started at the end of 2020, Germany and Sweden even recorded a slight increase at the beginning of 2021 and in autumn 2021. Corona measures and economic influences, such as increased unemployment or short-time work, obviously had no effect on fertility.

The situation is different for Covid vaccines:

In contrast, there is a clear correlation between the start of vaccination programs and fertility decline nine months later. In both Germany and Sweden, the vaccination campaigns peaked with mass enrollments for the first vaccination in April, May and June 2021, followed by a wave of second vaccinations that peaked between May and August of the same year. (Two vaccinations were considered a full vaccination.) The implementation of these programs in Germany and Sweden coincides very well with a marked change in fertility levels exactly nine months later. Birth rates remained at reduced levels during the first half of 2022.

The decline in Germany is around 15%, while in Sweden it is 10%. Early studies already showed that coviral vaccines have a negative impact on fertility. Based on this, it seems that a systematic investigation of this effect is urgently needed - but the BiB sees it differently: instead of even considering that the decrease in live births could be due to medical consequences of mass vaccinations, they indulge in mind games about possible behavioral aspects. In other words, they claim that the increasing relaxation of the measures (which hardly existed in Sweden to begin with) and the shift to a less domestic life have made people forget, so to speak, about any desire to have children. One of them even goes further and openly criticizes the RKI for not recommending vaccination for pregnant women until September:

Readers can decide for themselves how obvious these explanations are. In any case, there is no interest in Germany in explaining the causes of the massive drop in the birth rate by really taking all aspects into account.