Monstrous Comments from Francis on Plane 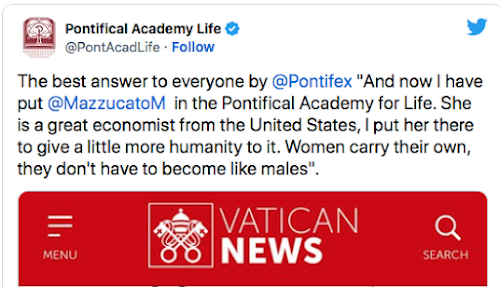 We all know the Papal Plane Game by now. It always seems to create a scandal but Francis doesn't care, or slow down.

Sure, nothing he says is Magisterial, but we all know that irrespective of the finer points of canon law or moral theology (or ecclesiology or theology for that matter) Francis still seems to speak without care, and those who desire to break down the teaching of Christ and the Apostles into something they find more palatable for the modern era, or more comfortable given their personal peccadilloes, jump on his every word to justify whatever blasphemy they seek to endorse.

A perfect demonstration of this is, on the way back from Bahrain, Pope Francis offered a justification for adding pro-abortionists as members of the Pontifical Academy for Life. As the National Catholic Register reports:

"While speaking about the gifts of women during an in-flight press conference on Sunday, Pope Francis mentioned the recent appointment of a pro-abortion economist to the Pontifical Academy for Life.

“I have seen that in the Vatican; every time a woman comes in to do work in the Vatican, things get better,” the Pope said Nov. 6 on the flight to Rome from Bahrain.

“And now, I put on the family council Mazzucato, who is a great economist from the United States, to give a little more humanity to this,” he said.

Mazzucato, known for her work promoting the public sector’s role in encouraging innovation, was among seven academics appointed by the Pope on Oct. 15 to serve five-year terms with the Pontifical Academy for Life."

The PAL Twitter account jumped straight on this as if it was all the justification needed for ADDING A PRO-ABORT TO THE ACADEMY FOR LIFE!!!

Nothing says "Pope Francis" like this indefensible appointment of an economist who seems to espouse every false idea the Church stands against. As I have long considered, Pope Francis' actions speak louder than his words and what could fit better than appointing a woman who advocates the mass slaughter of unborn children being appointed to the Academy which was set up to further the teaching of the essential dignity of human life?

In terms of discussion, what could such voices achieve in the Academy apart from watering down Church teaching; presenting a counter point to the pre-eminence of life issues?

Paglia - the man Francis put in charge of the Pontifical Academy for Life defended the appointment of Mazzucato saying:

“While the Catholic Church is opposed to abortion, it recognises that in some situations people of goodwill can support laws and public policy designed to reduce recourse to abortion while allowing the procedure in some cases.”

He also tried to argue that Mazzucato's tweets were “pro-choice” but not “pro-abortion”. - which struck me as insulting people's intelligence as much as arguing about a point of grammar which makes absolutely no difference to the facts whatsoever. If any, it is adopting the language that the pro-abortion lobby insist we adopt, language which seeks to anesthetize us from the reality of the act of ending a life of the most innocent whilst they are most vulnerable. Ask yourself, why would the Head of the Pontifical Academy for Life be adopting and arguing for such language? Why on earth would any Catholic? It is seriously demonic, I just can't see how it could be anything else!

The pope's comments regarding this appointment are disgraceful to say the least. They lay bare his preference for utilitarianism over truth, a trait which has been all too self evident throughout his reign as pontiff. This direction "where the morality of human acts [are] judged without any reference to the man's true ultimate end" (Veritatis Splendor #74 constitutes a direct attack on Catholic truth.

He is the Roman Pontiff, head of the Catholic Church at a time when the Gospel is increasingly under pressure and rarely heard by the faithful (as clearly evidenced recently in Co. Kerry). Instead of making it his priority to ensure people do hear the Good News, Francis instead engages in obfuscation and Jesuitical sophistry at every opportunity, contradicting himself and the settled teaching of the Church whenever he is asked anything and never clarifying any of his baffling comments.