Of Tattoos and Stigmata 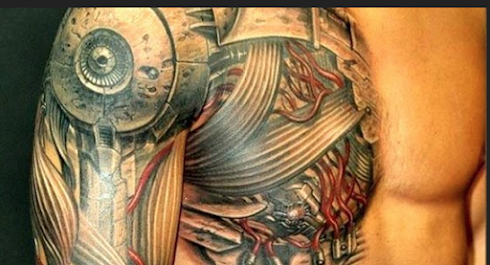 I recently saw a cartoon of a football coach exhorting his new recruits. After he had finished his pep talk, one young rookie asked: “When do we get our tattoos?” Which led me to reflect.

When I was young, very few people had tattoos. Most were sailors who, at some port of call, got a tattoo of an anchor on their upper arm, the word “Mom,” or the name of their sweetheart back home. The more daring sailors might be tattooed with the side view of a rather “chaste” naked lady. Such is not the case today.

For the past twenty or more years, tattoos have become very popular, both for men and women. Moreover, they have become much more elaborate and ubiquitous – on arms, legs, thighs, back, chest, belly, and neck – in various combinations. Likewise, there are various creative designs – swirling patterns in multiple colors interlaced with flowers, butterflies, or birds.

Although some tattoos are hideous, macabre, and even demonic, many tattoos are “in good taste” and often quite appealing, and even sexy – that is, if one is young and, so, with still firm skin.

Few things can be more unattractive than a tattoo on drooping, sagging, wrinkled, aging flesh. In the not-too-distant future, such withering tattoos will become common. Undoubtedly, there will be a demand for men’s long-sleeved shirts and long pants, and women’s dresses with long sleeves and hemlines that go down to the ankles. Something must hide the once-considered beautiful tattoos that have now turned unsightly.

But why has this age become an age of tattoos? I think that those who get tattoos believe that they are not beautiful enough simply with their own birthday suit. They need to decorate themselves in order to make themselves more attractive – to be more appealing, especially more alluring to the opposite sex. But this brings me to my main point.

God created everything good and everything God creates is beautiful according to its nature – “what it is.” God created human beings in his own image and likeness, and so human beings, by their very nature, bear the beauty of God himself – not just in intellect and will but also in body.

In getting a tattoo one is saying God did not do a good enough job. His handiwork must be improved. The bigger issue is that humankind did not tarnish its beauty by being tattooed but by sinning – sin is the hideous mark that discolors humankind, and it is more than skin deep.

As the Father created man good and beautiful through his Word – he who bears the divine beauty as God’s Son – so the Father sent his Son into the world so that as man, in human flesh, he might re-create man in his own beautiful image and likeness.

Jesus assumed our sin-marred flesh and, on the Cross, he put that flesh, tattooed by sin, to death. In rising from the dead Jesus became a new creation, the new and glorious man, so that all of humankind might be made new in him – he is the firstborn of the new creation, the new Adam of a new human race.

Now, through faith and baptism, we die and rise with Christ. We cast off the sin-marred flesh and assume the new flesh that is the risen Lord Jesus. We are born anew in the transforming life of the Holy Spirit so as to once more become children of the Father. Thus, in order to make humankind more beautiful, the crucial need is not the ink of the tattooer’s stinging needle, but the Spirit-imprinted stigmata of the Cross, for the Cross has vanquished the sting of death.

St. Paul was well aware of this cruciform truth. “Let no man trouble me; for I bear on my body the marks of Jesus.” (Gal. 6:17) The physical marks of Jesus that Paul bore were the marks of the Cross, the marks that he had died and risen with Christ.

Such marks bore a beauty that was more than skin deep. Rather, they displayed the beauty of a man who was completely transformed into the likeness of Christ. By abiding in the crucified Christ, he assumed the salvific marks of the risen Christ.

Or, better, they can proclaim with St. Paul: “I have been crucified with Christ; it is no longer I who live, but Christ lives in me.” (Gal. 2:20) To be crucified with Christ is to die so that Christ may live in us, and we live in him. To possess the stigmata testifies to our oneness with the crucified and risen Jesus.

Not many receive the visible stigmata as did Sts. Paul, Francis, and Pio, yet all of us do bear the invisible stigmata, for we too have died and have risen with Christ. We can profess with St. Paul that we glory in nothing “except in the Cross of our Lord Jesus Christ,” for in him we have become “a new creation.” (Gal. 6:14-15)

Bearing the marks of the Cross is what makes each of us beautiful – a beauty that utterly eclipses and even brings a note of sadness over the misdirected beauty of the tattoo.

Moreover, the marks of the Cross will never grow old; they will never sag as our body ages; we will never have to cover them up. Rather, they will become ever more glorious until they fully radiate their heavenly, everlasting Spirit-filled beauty – in communion with Jesus Christ, our crucified and risen Savior and Lord.

Of Tattoos and Stigmata