Respect and devotion in churches 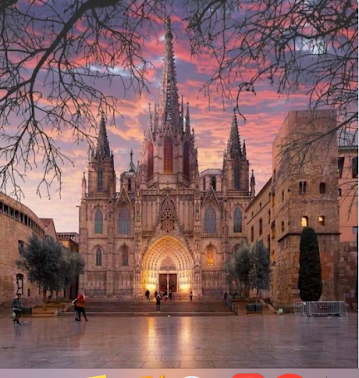 The Lord, moved by zeal for his Father's house, by a piety that was born from the depths of his heart, could not bear that deplorable spectacle and threw them all out of there with their tables and their livestock. Jesus underlines the purpose of the Temple with a text from Isaiah well known to all6: My house shall be a house of prayer. And he added: But you have made it a den of thieves. The Lord wanted to inculcate in everyone the respect and composure that should be shown in the Temple because of its sacred character. How should our respect and devotion be in the Christian temple - in the churches - where the Eucharistic sacrifice is celebrated and where Jesus Christ, God and Man, is truly present in the Tabernacle! "There is an urbanity of piety. -Learn it. Those "pious" men, who do not know how to attend Mass - even if they hear it daily -, nor to make the sign of the cross - they make strange scribbles, full of haste -, nor to bow the knee before the Tabernacle - their ridiculous genuflections seem a mockery -, nor to bow their heads reverently before an image of the Lady -, are pitiful."

My house shall be a house of prayer. How clear is the expression that designates the temple as the house of God! As such we must have it. We must go to it with love, with joy and also with great respect, as befits the place where God himself is waiting for us

We often hear about or attend events and ceremonies of political, academic or sporting life: a reception, a parade, the Olympics.... And one notices immediately that protocol and a certain solemnity are not superfluous. These details, sometimes minimal - the precedences, the way of dressing, the slow rhythm of walking... - enter through the eyes and give the event a good part of its value and its being.

Also between people, affection is shown in small details, in attentions and cares. The wedding ring that the future spouses give each other or other attentions are not in themselves love, but in them it is manifested. It is the simple rite that man needs to express the most intimate part of his being. Man, who is not only body nor only soul, also needs to manifest his faith in external and sensitive acts, which express well what he carries in his heart. When we see someone, for example, kneeling with devotion before the Tabernacle, it is easy to think: he has faith and loves his God. And this gesture of adoration, the result of what one carries in one's heart, helps oneself and others to have more faith and more love. Pope John Paul II points out in this regard the influence that the simple and sincere piety of his father had on him: "The mere fact of seeing him kneel - the Pontiff recounts - had a decisive influence on my years of youth".

The incense, the bows and genuflections, the appropriate tone of voice in the ceremonies, the dignity of the sacred music, of the ornaments and sacred objects, the treatment and decorum of these elements of worship, their cleanliness and care, have always been the manifestation of a believing people. The very splendor of the liturgical materials facilitates the understanding that it is above all a tribute to God. When one looks closely at some of the goldsmith's monstrances of the sixteenth and seventeenth centuries, one notices how the art almost always becomes richer and more precious as the place to be occupied by the consecrated Host approaches. Sometimes it descends to details that are barely noticeable from a short distance away: the best art has been placed where only God, one might say, can appreciate it. This care even in the smallest thing helps powerfully to recognize the presence of God himself.

Nor is the Lord indifferent to the fact that we go to greet Him - the first thing! - when we enter a church, or the effort to arrive punctually for Holy Mass - better a few minutes before it begins -, the genuflection well done before Him present in the Tabernacle, the postures or the recollection that we keep in His presence.... Is the temple for us the place where we worship God, where we encounter him with a true, real and substantial presence?