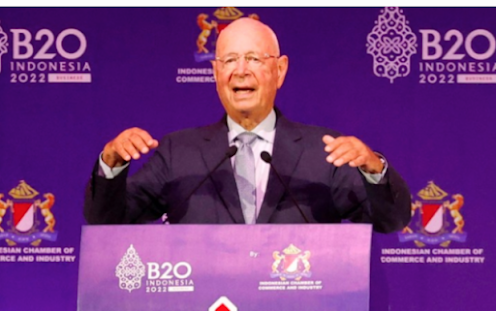 World Economic Forum founder Klaus Schwab has instructed world leaders and heads of state to being the process of “restructuring” the global economy in line with the WEF corporate-socialist vision, during a speech at the G20 in Bali, Indonesia on Tuesday.

While the G20 summit has traditionally been a forum for heads of state and governments from the world’s leading economies, Schwab used his influence to gatecrash the party in recent years and created a space at the B20, the official G20 dialogue with the business community.

According to Schwab, who nobody elected president of the world, now is the time to implement the roll out of the “Great Reset”, taking advantage of various crises as a means to accomplish a “restructuring” of the current world order.

The restructuring that the WEF obsesses over is a global socialist system based on Schwab’s concepts of the 4th Industrial Revolution, the Shared Economy and Stakeholder Capitalism (corporate governance).

He does not say much in terms of planning in his speech to the G20, but he does imply that while fragmentation is necessary, too much fragmentation could be troublesome.

In other news, Bill Gates, who is also in attendance at the G20, was caught on video confessing to his inner circle that climate change and green energy is a WEF scam.