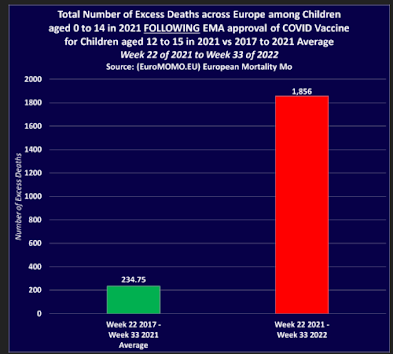 SLOW MOTION GENOCIDE: Excess mortality up 40% all around the world following release of covid “vaccines”

(Natural News) Mathematician Igor Chudov conducted an assessment of two completely different datasets encompassing tens or even hundreds of millions of people from which he concluded that the relative risk of death for people who got “vaccinated” for the Wuhan coronavirus (Covid-19) is 40 percent higher than that of the unvaccinated.

All around the world where Fauci Flu shots were unleashed, Chudov says, excess mortality is through the roof. It is something that many of us have known about for a while now, but that was substantiated by a patchwork of data from here and there – not quite enough to convince some, in other words, that mass depopulation is, in fact, taking place.

Well, Chudov addressed this by conducting an extensive analysis of numerous datasets to scientifically prove that covid shots are killing lots and lots of people, despite being branded as the “cure” for Chinese Germs. (Related: The more covid jabs a person gets, the greater his or her chances are of dying.)

Chudov points to two different articles, one that show excess mortality by country and the other that shows it using the UK deprivation quintile. Amazingly enough, analyses of both of these completely different datasets produce the very same results.

If you are interested in the finer details, you can take a closer look at the mathematical methodology Chudov used at his Substack page.

One of the things Chudov uncovered is a “pull-forward effect” in the Y-intercept of his linear regression chart. In short, the pull-forward effect shows that if the so-called “vaccines” were truly effective at quelling the plandemic, then there would have been negative excess mortality after they were unleashed. The exact opposite actually occurred.

“A sad outcome of the first two years of the Covid pandemic is that Covid killed persons with ‘comorbidities,’ very old people, and so on,” Chudov explains. “Had the pandemic not happened, the mortality would be the same yearly. However, Covid caused the unfortunate premature demise of people who were likely to die in the next few years.”

“So, if the pandemic stopped and vaccines were not affecting mortality, you would expect NEGATIVE excess mortality – simply because people who were likely to die in 2022 already died in 2020. The negative Y-intercept shows this pull-forward effect, discussed in detail by the Ethical Skeptic.”

While admittedly “extremely speculative,” Chudov’s latest work serves as some real food for thought – especially since it is based on two completely different and unrelated datasets that led him to the exact same conclusions.

A 40 percent increase in mortality is anything but minor, Chudov warns, referring to government officials and corporate media outlets that continue to claim covid jab deaths are “rare.”

Keep in mind that, in this context, a 40 percent increase in mortality means that a “fully vaccinated” person will now live for significantly less time than he or she otherwise would have had covid jabs not been injected.