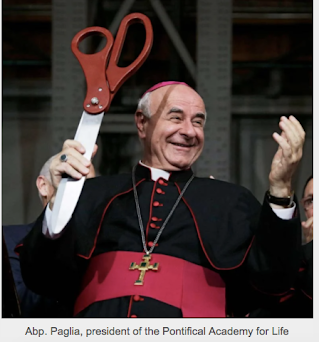 VATICAN CITY (ChurchMilitant.com) - Pope Francis' appointment of a pro-abortion atheist to the Pontifical Academy for Life has sparked a blame game among papal bigwigs.

The finger-pointing comes amid mounting speculation over a new papal document, which is expected to reverse the Church's ban on contraception articulated by Pope Paul VI in his pro-life encyclical Humanae Vitae.

Writing in First Things on the Feast of All Souls, papal biographer George Weigel blamed PAL chief Abp. Vincenzo Paglia for presiding over the "deconstruction of the Pontifical Academy for Life as Pope St. John Paul II created it."

Weigel did not mention Francis' role in appointing Mariana Mazzucato, but he attacked Paglia as "not the man I knew some three decades ago."

"Archbishop Paglia has recently agreed to the appointment of Professor Mariana Mazzucato, a pro-abortion economist, as a member of the pontifical academy, in the name of 'fruitful interdisciplinary, intercultural, and interreligious dialogue,'" Weigel shrieked.

Excoriating the archbishop's defense of Mazzucato's appointment as "the most shallow, and indeed duplicitous, nonsense," Weigel asked if it was legitimate to appoint heretics or anti-Semites to Vatican bodies in the name of "dialogue" about Christianity or Judaism.

Ironically, Weigel had earlier called for the abortion-tainted COVID jab to be distributed rapidly.

Weigel's daughter Dr. Gwyneth Anne Spaeder, who is married to Dr. Jeffrey Spaeder, the chief medical and scientific officer of IQVIA, a company linked to the pharmaceutical industry and to the manufacturers of the COVID jab, targeted Abp. Carlo Maria Viganò for his position against the jab.

It is widely known that the president merely rubber-stamps the pope's nominations to the academy. Moreover, the academy's statutes, rewritten in 2016 by Francis, clearly state that ordinary members "are appointed for a term of five years by the Holy Father."

Pope Francis has praised Mazzucato in his book Let Us Dream, describing her writing as "not ideological" and moving "beyond the polarization of free market capitalism and state socialism" with "a concern that all of humanity have access to land, lodging and labor."

On his return flight from Bahrain, Francis categorically stated that he had chosen the "great economist" Mariana Mazzucato as a full member of the Pontifical Academy for Life "to give a little more humanity to it."

I am called to evaluate academics according to the criteria of this world.GabTweet

The pope told reporters that he was triggering a "revolution" by appointing women to top positions in the Vatican "because women know how to find the right way; they know how to move forward."

On Thursday, Paglia laid the blame for the appointment at Francis' doorstep, writing that "the pope himself reiterated that it was a pontifical appointment, as happens with every appointment of an ordinary academic [member of the academy]."

Following global outrage over Mazzucato's appointment, Paglia defended the atheist economist, insisting that "her tweets may have been 'pro-choice,' but they were not 'pro-abortion.'"

The archbishop repeated his "pro-choice" language in his defense of Mazzucato, arguing that support for the economist's "pro-choice political position" can "be deduced, exclusively, from likes and the forwarding of tweets."

In the interview, the archbishop gave the strongest indication thus far that Francis was poised to reverse the ban on artificial contraception. "I believe that the day will come when Pope Francis or the next pope [will do so]," he remarked. "Certainly, we have to address it."

Paglia castigated "those who oppose discussing these issues," as infected with "a pathology" and a "sick faith" that "runs the risk of blocking the Spirit."

The president of the Pontifical Academy for Life reasoned how a couple might adhere legalistically to Humanae Vitae by rejecting artificial contraception but might use only natural methods and choose not to have any children.

Earlier, when asked on his return flight from Canada, if the Church could change its teaching on contraception, Pope Francis replied that "dogma, morality, is always in a path of development, but development in the same direction."

Father Maurizio Chiodi, a moral theologian at the John Paul II Theological Institute for Marriage and Family Sciences has argued that Humanae Vitae is a "reformable doctrine," claiming it's not infallible teaching.

Chiodi, whom Pope Francis had appointed an ordinary member of the Pontifical Academy for Life in 2017, argued that it would be an act of "responsibility" to use artificial contraception where "natural methods are impossible or unfeasible."

In October, Chiodi pushed for a "theological discussion" on Humanae Vitae, observing that "the possibility of dissent" is overdue.