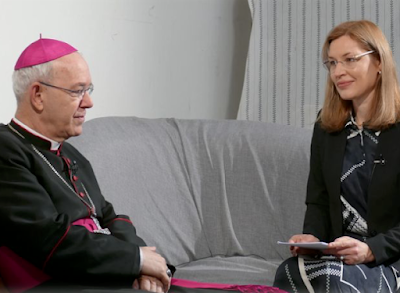 Schneider: The Results of the Synod on Synodality are Conceived in Advance

Bishop Athanasius Schneider assumes that the results of the Synod on Synodality are already in place. He said this in an interview with @cjm-media and Gloria.tv (17 November).

Already at the 2014/2015 Family Synod, several bishops reported to him that their objections were not taken into account and Amoris Laetitia, the result of that synod, appeared conceived in advance.

Schneider expects that the current Synod will juxtapose ambiguous/wrong and correct statements in order to "reassure the conservatives".

This is how Vatican II proceeded, as well as Amoris Laetitia, but with the current Synod it maybe "even worse". For Schneider, synodality is a "trick" and "cover" to "further dilute the faith of the Church."

It is wrong and a Protestant thing to put revealed truths of faith about sexuality, homosexuality and women's ordination "up for discussion". This, Schneider said, corresponds to a political parliament, but not to the truth of the faith.

Schneider has learned from several countries that votes in favour of the Roman Mass were received by the Synod but excluded from the documents.

He has no hope for a positive outcome because Francis has filled the Synod's leadership only with people who demand a whitewash of homosexuality. He names Cardinals Hollerich and Grech and the French nun Nathalie Becquart.

"When these people sit at the helm of the Synod, you don't need to be particularly intelligent to see that the results are already fixed from the outset," Schneider soberly observes.

For him, insulting Catholics as "ideologues" [by Francis] is a misuse of the term, because the true ideologues are the leaders of the Synod, who set their opinions against the Word of God and "ruthlessly" enforce them against Catholics.

The Church has begun in the 1970s to adapt to the world, "to see everything naturalistically without the supernatural view of faith". Since then, this adaptation has become radicalised. One wants to transform the Church into a human association, an NGO, a [left-wing] party that disregards the faith and adapts to the fashions of the time, Schneider explains.

He considers the Synod a logical consequence of the parliamentary style introduced in the Church. An excess of commissions, discussion groups and meetings is indirectly proportional to the faith.

Parallel to the flood of documents, in the last decades foxes have been put in charge to guard the chicken. Already John Paul II and unfortunately also Benedict XVI have "appointed obviously liberal, faithless clerics as bishops and cardinals" - Schneider remarks:

"What good is a beautiful document and a synod if these bishops and cardinals continue to corrode the faith in their sphere of influence?"