The Bergoglian church, ally of the pagans 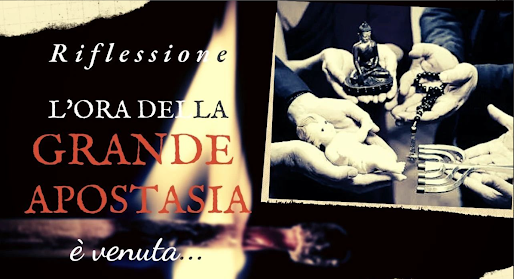 Anguera's message... "THE GREAT SHIP WILL BE DIVERTED FROM SAFE HARBOR"....

"Dear children, do not fear. My Jesus is with you, even if you do not see Him. I ask you to be faithful to my calls, for I desire to lead you to holiness. You live in a time worse than that of the Flood. My Lord is waiting for you. Do not deviate from the path I have indicated to you. The great ship will be diverted from its safe harbor, but those who remain faithful to the lessons of the past will be redeemed and will not perish. Courage! Be men and women of prayer. What you must do, do not put off until tomorrow."

It has taken a little less than a decade under this last pontificate for us to realize that the Woitylian-Ratzingerian bastion that safeguarded the non-negotiable values of Catholic social doctrine has been annihilated. The so-called "modernist," or rather neo-modernist, revolution has largely achieved its goals of "updating" the Church. Today, the post-conciliar Church is operationally disintegrated into a myriad of ideological currents and sub-currents that reinterpret the bimillenary Magisterium of the Catholic Church at will, in order to find continuous accommodations with the mentality of the world.

If in the past the Church taught that there were immutable laws, divine commandments, a natural law to which all men of all times and places were bound, today it preaches the evolutionism of dogmas, subjectivism and sentimentalism, applied especially in the spiritual and liturgical field. Doctrinal relativism is gradually destroying Catholicism, perpetrating a continuous betrayal of its doctrine, its universal Magisterium, its theology and its morals.

A generalized betrayal perpetrated not by a minority, but by almost the entire ecclesiastical body, up to the highest hierarchies. The prelates, reduced to ever more socially compromised administrators, bent on inventing ever more "modern" religious initiatives and practices to keep up with the times, perhaps do not even realize that they are the main operators daily overthrowing the objective truths of the Catholic Church of all times.

The result is new emotional and personal theologies that, like billboards for new consumer products, lure souls to new paths of salvation, without effort or suffering. New bridges and highways are inaugurated, whose flashy and misleading signs indicate that they lead to paradise, when in reality they lead to perdition.

Perhaps the words of the Most Holy Mother, the Star that points the way to salvation, capture this tragic situation when she says:

"You are living in an epoch worse than that of the Flood .... The great ship will be diverted from the safe harbor".

The great ship, the Church, is already leaving the right path, the right course that leads to salvation. When you are faced with a fork in the road where one path goes up on the right and the other goes down on the left, you cannot choose to follow both. Between God's way and Satan's way there is a great distance, and it grows deeper and deeper as they advance toward their respective goals.

Life is like that, it flows between evil and good, it is a test, a choice at a crossroads. At the center of the crossroads is man, with his will and his free will, who has God and His Heaven on one side, Satan and his Hell on the other. Man can choose. No one forces him.

But what would our Lord Jesus Christ say about this situation today? We can imagine it with the help of his revelations made to Maria Valtorta, in chapter CLXXIV Gospel as revealed to me:

"Let it not be said to me: 'But Satan tempts' as an excuse for descents to the low road. God also tempts with his love, and it is very strong; with his words, and they are very holy; with his promises, and they are very seductive. Why, then, let oneself be tempted by only one of the two, and by the one who least deserves to be heard? Are not the words, promises and love of God sufficient to neutralize the poison of Satan?.... If one is morally and spiritually sound and strong, believe that he is not exempt from being tempted, but evil does not take root in him? The intelligent man does not become the laughing stock of the first doctrine he hears. The man saturated with one doctrine cannot make room in himself for others.

...But if you confess to me that you change your thinking at the slightest gust of wind, I see that you are full of emptiness, that your spiritual fortress is full of openings, that the dikes of your thinking are broken in a thousand places and that from them the good waters flow out and the polluted ones enter, and that you are so apathetic and stagnant that you do not even realize it and do not provide. You are a wretch .

The Church is tottering as she allows herself to be carried away by the mentality of the world, taking dangerous paths that move away from the Truth. It is enough to observe how ecclesiastical authorities today deal with issues such as abortion, euthanasia, immigrationism, ecumenism, pandemics, etc., with total disrespect for the universal Magisterium, Tradition and the Gospel. The safe and divine path has been abandoned to take the path of a-moral liberalism and subversive socialism, a path that is no longer Catholic.

Jesus reveals to Maria Valtorta, in the same chapter quoted above:

"No one can serve two masters of different thinking. Either he will love one and hate the other, or vice versa. One cannot be equally of God and of Mammon. The spirit of God cannot be reconciled with the spirit of the world. The one ascends, the other descends. One sanctifies, the other corrupts. And if you are corrupt, how can you act with purity? The sense is kindled in the corrupt, and behind the sense the other corrupts.

The attitude to take is to resist, to unite in order to survive while remaining "Catholic", adhering fully and operatively to the Gospel, defending tooth and nail the Magisterium, the morals of the bimillennial Church and Tradition.

To consider that modernists, neo-modernists and progressives are still Catholics is now an obvious exaggeration, because they live a faith - even if baptized - as non-Catholics, because they are no longer connected to the immutability of Truth, but have become servants of the globalist powers, which now manifest themselves clearly for what they are:

heretics, apostates, demolishers of Catholicism and faithful allies of the pagans.

They are no longer Catholics, we must fight them, oppose them, rejecting the principles that this Revolution imposes not only on society, but above all on the Church. Pope Ratzinger said: "...today we see it in a truly terrifying way: that the greatest persecution of the Church does not come from enemies outside, but arises from sin within the Church".

In Astana, Khazakhstan, a meeting was held a few months ago to lay the groundwork for a syncretistic interreligious theological plan to deal the final blow to true Catholicism.

The Blessed Virgin Mary, our beacon in spiritual storms, continues in her message encouraging us: "but those who remain faithful to the lessons of the past will be redeemed and will not perish. Courage! Be men and women of prayer".