The maternal intercession of Our Lady 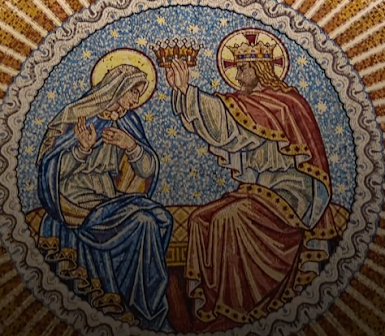 Throughout the centuries, the Christian people have felt moved to present their petitions to God through his Mother, Mary, and at the same time our Mother. In Cana of Galilee she manifested her power of intercession in the face of a material need of a bride and groom who perhaps found themselves with an influx of friends and acquaintances greater than expected. The Lord had determined that their hour would be brought forward by the request of his Mother. "In the public life of Jesus," the Second Vatican Council points out, "his Mother appears significantly from the very beginning, when at the wedding feast of Cana in Galilee, moved by mercy, she prompted by her intercession the beginning of the miracles of the Messiah. From the beginning, the redemptive work of Jesus is accompanied by the presence of Mary. On that occasion, not only was the lack of wine at the wedding feast remedied with abundance, but, as the Evangelist expressly indicates, the miracle confirmed the faith of those who followed Jesus more closely. Thus in Cana of Galilee Jesus performed the first of his miracles by which he manifested his glory, and his disciples believed in him.

The Blessed Virgin Mary, always attentive to the difficulties and needs of her children, will be the channel through which our petitions will promptly reach her Son. And she will straighten them out if they go somewhat askew. "Why will Mary's prayers be so effective before God?" asks St. Alphonsus Maria de Liguori. And the Saint answers: "The prayers of the saints are prayers of servants, while those of Mary are prayers of a Mother, from which comes their efficacy and authoritative character; and since Jesus loves his Mother immensely, she cannot pray without being answered (...).

"To know well the great goodness of Mary, let us remember what the Gospel says (...). The wine was lacking, with the consequent haste of the spouses. No one asks the Blessed Virgin to intercede with her Son on behalf of the dismayed spouses. However, Mary's heart, which cannot but pity the unfortunate (...), impelled her to take upon herself the office of intercessor and to ask her Son for the miracle, even though no one asked her to do so (...). If Our Lady acted in this way without being asked, what would have happened if she had been begged?

Today, a Saturday that we try to dedicate especially to Our Lady, is a good occasion to go to her more often and with more love. "To your Mother Mary, to St. Joseph, to your Guardian Angel..., beg them to speak to the Lord, telling Him what, because of your clumsiness, you do not know how to express."