We must have recourse to Mary 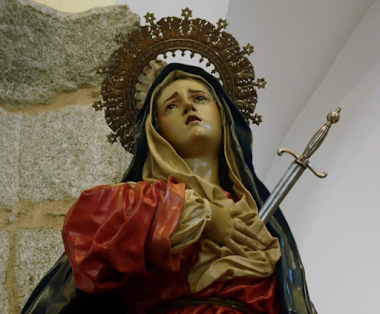 How great should be our trust in this Queen, knowing how powerful she is before God, and so rich and full of mercy that there is no one on earth who does not participate in and enjoy Mary's goodness and favors. Thus revealed the Virgin Mary to St. Bridget: "I am," said the Queen of Heaven and Mother of Mercy to her, "the joy of the just and the door to introduce sinners to God. There is no sinner on earth so wretched as to be deprived of my mercy. For if he obtains no other grace through me, he receives at least that of being less tempted by demons than he would otherwise be. There is no one so far from God, unless he is totally accursed, as is understood by the final reprobation of the damned; no one who, if he invokes me, does not return to God and obtain mercy". All call me the mother of mercy, and truly the mercy of God towards men has made me so merciful to them. Therefore he will be unhappy forever in the next life who in this life, having recourse to me, who am so merciful to all and so desirous of helping sinners, is unhappy not to come to me and is condemned.

Let us go, then, but let us always go to the plants of this most sweet queen if we want to be saved in all safety. And if the sight of our sins frightens and discourages us, let us understand that Mary has been constituted queen of mercy to save with her protection the greatest and most lost sinners who entrust themselves to her. These are to be her crown in heaven as her divine spouse declares: "Come from Lebanon, my bride; come from Lebanon, come and you shall be crowned... from the dens of lions, from the mountains of leopards" (Ct 4:8). And what are these caves and mountains where these beasts and monsters dwell if not the miserable sinners whose souls become the den of sins, the most deformed monsters there can be? Well then, comments Abbot Rupert, precisely from these wretched sinners saved by her mediation, O great queen, you will see yourself crowned in paradise, for their salvation will be your crown, a crown most fitting for a queen of mercy and most worthy of her. In this connection, read the following example.

Conversion of Mary, the sinner, at the hour of death.

It is related in the life of Sister Catherine of St. Augustine that in the same place where this servant of God lived there lived a woman named Mary, who in her youth had been a sinner and even in her old age continued obstinate in her perversities, so that, thrown out of the village, she was forced to live confined in a cave, where she died abandoned by all and without the last sacraments, for which reason she was buried in the open ground.

Sister Catalina, who used to commend to God with great devotion the souls of those she knew who had died, after learning of the unfortunate death of that poor old woman, did not even think of praying for her, considering her condemned as everyone else did.

Four years passed, and one day a soul in pain appeared to her and said to her:

- Sister Catherine, what misfortune is mine! You commend to God the souls of those who die, and you have not taken pity on my soul alone.

- Who are you? -said the servant of God.

- But have you been saved? -replied Sister Catherine.

- Yes, I was saved by the mercy of the Virgin Mary.

- When I saw myself at death's door, seeing myself so full of sins and abandoned by all, I turned to the Virgin Mary. abandoned by all, I turned to the Mother of God and said to her: Lady, you are the refuge of the abandoned; now I find myself abandoned by all; you are my only hope, you alone can help me, have mercy on me. The Blessed Virgin obtained for me an act of contrition, I died and was saved; and now my Queen has granted me that my sorrows may be shortened by making me suffer in intensity what I should have purged for many years; I only need some masses to free me from purgatory. I only need a few masses to free me from purgatory. I beg you to send them to be celebrated as I promise to pray always, especially to God and to Mary, for you.

The glories of Mary