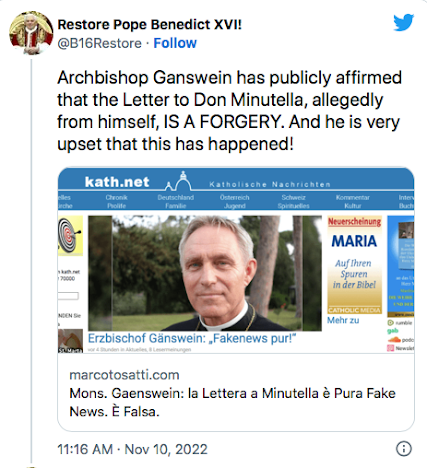 DON MINUTELLA AND THE QUESTION OF THE LEGITIMATE POPE

Archbishop Gänswein: "The letter is fabricated and a lie".

(Rome) The letter to the excommunicated and laicized priest Alessandro Minutella is "false and lying." Archbishop of the Curia Georg Gänswein left Kath.net in no doubt that Minutella was the victim of a forgery. From the Vatican?

Minutella had received the letter in duplicate, in German and Italian, by registered mail from the Vatican. It was written on the stationery of Archbishop Georg Gänswein, Benedict XVI's personal secretary, who strongly denied having written such a letter. It is "pure fake news."

The letter is a response to a letter sent by the eight priests of the Marian Congregation of Priests to Archbishop Gänswein last August. In it they told him, in the name of Benedict XVI, to celebrate Holy Mass in union with him, because they continue to recognize him as the legitimate Pope.

However, Gänswein's alleged response was scathing. Benedict had "always celebrated in unity with Pope Francis" and had promised him unconditional obedience. Minutella and the other priests of the sodalitium were in "grave error." The letter ended by assuring Benedict XVI that he prayed that Minutella and his fellow priests would "repent."

Minutella, a priest in the archdiocese of Palermo until 2017, was visibly moved when the Vatican's response letter was presented. The response was the exact opposite of what the sodalitium priests expected. Minutella described the response as a "masterpiece of the Freemasons." He must not have been so wrong

Archbishop Gänswein today distanced himself from the letter, which definitely did not come from him. 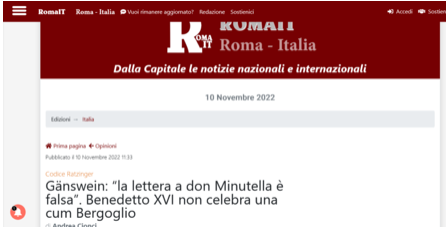 But who did it come from then? Many people knew about the letter to Gänswein because Minutella had read it publicly in a video in September. But who would dare to send a letter with forged stationery from Archbishop Gänswein of the Curia with his coat of arms? Who would go to the trouble of writing this fake letter of reply not only in Italian but also in German? And, moreover, to send it by registered mail from the Vatican?

Evidently, an older letter from Monsignor Gänswein was used to fabricate the forgery.

Art historian, journalist and publicist Andrea Cionci, author of the book "The Ratzinger Code", told RadioRadio in an interview that the forgery had become a "huge own goal for the Bergoglian forces".

Cionci is scheduled to comment this afternoon alongside Minutella on a program on Radio Domina Nostra, Minutella's YouTube channel.

The controversial topic of the "two popes" living in the Vatican has been enriched with yet another chapter. Moreover, it looks like a detective story. The forgery becomes grist to Minutella's mill, whose thesis is that the Vatican has been "taken over by the Freemasons".