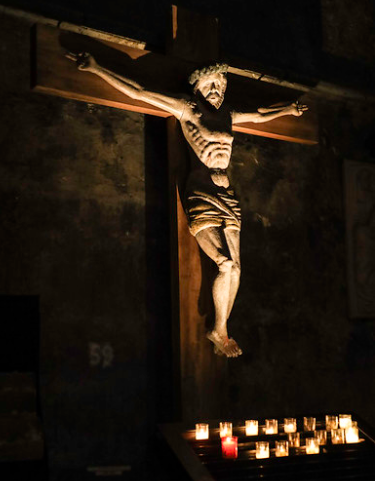 Some Pharisees were converted, and were friends and faithful disciples of the Lord, but many others did not know how to recognize the Messiah, who passed through their streets and squares. Pride caused them to lose the north of their existence and their religious life, of which they boasted so much, became hollow and empty. Their practices of piety were consumed in formalisms and mere appearances, carried out for the sake of the gallery. When they fasted, they would show their faces so that others would know it4; when they prayed, they liked to do it standing up and with ostentation in the synagogues or in the middle of the squares5; when they gave alms, they would proclaim it with trumpets.

The Lord will recommend to his disciples: Do not do as the Pharisees do. And he explains to them why they should not follow their example: All their works they do to be seen by men. With a strong word, to make them react, he calls them hypocrites, like whitewashed sepulchres: outwardly showy, but full of rottenness inside.

It was vainglory "that turned them away from God; it caused them to seek another theater for their struggles and lost them. For, as one seeks to please the spectators that each one has, according as the spectators are, such are the combats that are performed". In order to be humble, we can never forget that the one who witnesses our life and our works is the Lord, whom we must try to please at all times.

The Pharisees, through pride, became hard, inflexible and demanding with their fellow men, and weak and understanding with themselves: They bind heavy burdens on others and they do not even lay a finger to move them. To us the Lord says: The greatest among you must be your servant. And the Holy Spirit, through St. Paul: Bear one another's burdens, and in this way you will fulfill the law of Christ. One of the clearest manifestations of humility is to serve and help others, not in isolated actions but in a constant way.

Perhaps one of the harshest reproaches the Lord makes to them is this: You have not entered, and those who were about to enter you have hindered. You have closed the way to those whom you were to lead. Blind guides! he will call them elsewhere. Pride makes one lose the supernatural light for oneself and for others.

Pride has manifestations in all aspects of life. "In relationships with others, self-love makes us touchy, inflexible, arrogant, impatient, exaggerated in the assertion of self and rights, cold, indifferent, unjust in our judgments and in our words. It delights in speaking of one's actions, of one's inner lights and experiences, of one's difficulties, of one's sufferings, even without needing to do so. In the practices of piety, it delights in looking at others, observing them and judging them; it is inclined to compare itself and to believe itself better than them, to see only defects in them and to deny them good qualities, to attribute to them ignoble desires and intentions, even to the point of wishing them evil. Self-love (...) makes us feel offended when we are humiliated, insulted or put off, or when we do not see ourselves considered, esteemed and given as we expected".

We must move away from the example and prayer of the Pharisee and learn from the publican: My God, have mercy on me, for I am a sinner. This is an ejaculatory prayer to be repeated many times, which fosters in the soul the love of humility, also at the time of prayer.