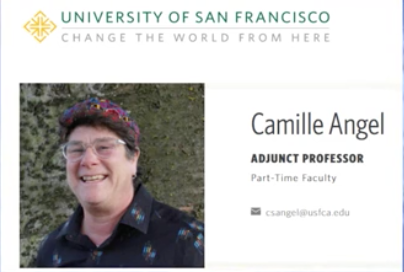 A Lesbian Man. The Times of Israel published an article about Camille Angel, a long-time homosex activist who calls himself a Lesbian, is rabbi-in-residence at the Jesuit Catholic University of San Francisco where he is – quote - “queering" religion. This allows Angel to perform a rainbow of outreach services, the paper explains. The University, founded in 1855, used to be a respectable institute of education.

No Catholics. Angel explains that his “rabbinate” is primarily among non-Jews and that in his “Queering Religion” class of 40 there is only one Jewish student. According to the University of San Francisco, a majority of undergraduate students are without religion. Some are Buddhist, Hindu, Jewish, Muslim, Atheist or Protestant. Catholics are a minority.

A Bigot. In his class, Angel teaches from what he calls “a Jewish perspective” how to navigate religious contexts, especially those religions that have attempted to – quote – “negate” homosexuals. In April, Angel is leading a social justice-centred interfaith Passover seder focused on themes of climate justice, interfaith solidarity, peace, health, and freedom. It seems that many of Angel’s students are studying sociology. As Dinesh d’Souha put it: “A bigot is simply a sociologist without credentials.”

Hatred. Together with Angel, some students started a homosex group on campus called “Qmmunity.” It is described as a sort of extension of Angel’s class. On Thursdays, the group hosts a lunch called “Breaking Bread and the Binary,” in which students come together to share a meal, their thoughts and reflections on current events. Angel says about this, “Being in this group out and proud, here and queer, on the lawn in front of the church, it’s the biggest satisfaction that Hitler and the Nazis and fascism and fundamentalism don’t rule our lives.” “Fundamentalist” is a slur which haters often used against Catholics, like the Jesuits who founded the University of San Francisco.