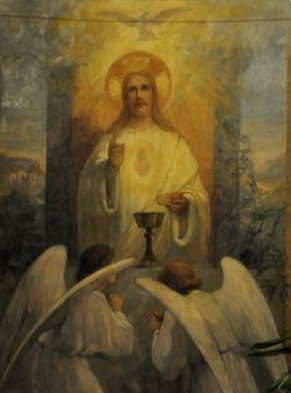 I want the world to know my Heart. Do men know what I have done for them...? I want to tell them that in vain do they seek their happiness outside of Me: they will not find it....

I will address my calls to all: religious and laymen, righteous and sinners, wise and ignorant, rulers and subjects. To all I come to say: if you seek happiness, I am happiness. If you want wealth, I am infinite wealth. If you desire peace, I am Peace, I am mercy and love.

I want my love to be the sun that illuminates and the warmth that warms all souls.

I want the whole world to know Me as God of love, forgiveness and mercy.

I want the world to read that I desire to forgive and to save. May the most miserable not fear... May sinners not flee from Me.... Let them all come, for I am always waiting for them as a Father, with open arms to give them life and happiness.

May the world hear and read these words: A father had an only son.

Both had noble hearts, charitable sentiments, the least misery moved them to compassion.

Among the servants of this kind lord, one became seriously ill, and was about to die if he was not attended with vigorous remedies and assiduous care.

But the servant was poor and lived alone.

What was to be done, let him die? The lord's nobility of sentiment could not allow it.

Would he send another of his servants to take care of him? Nor would he be calm, because taking care of him more out of interest than out of affection, he would lack perhaps a thousand details and attentions that the sick man needed.

The father, pitying his father, confided to his son his concern for the poor sick man, and told him that with assiduous assistance he could be cured and live for many years to come. The son, who loves his father and shares his compassion, offers to care for the servant with care, sparing neither toil, fatigue, nor solicitude, in order to obtain his cure.

The father accepts; he sacrifices the company of his son and the son sacrifices the caresses of his father and, becoming a servant, devotes himself to the assistance of the one who is truly his servant. He gives him a thousand cares and attentions, provides him with everything he needs, not only for his cure, but also for his well-being, so that after some time, the sick person recovers his health.

In admiration of what his master has done for him, the servant asks how he can show his gratitude.

The son advises him to present himself to his father, and now that he is cured, to offer himself again to him as one of his most faithful servants.

He does so, and recognizing that he is his debtor, he employs every means in his power to publish his master's charity; moreover, he offers to serve them without interest, for he knows that he does not need to be paid as a servant who is cared for and treated as a son.

This parable is a pale figure of the love that My Heart feels for souls and of the correspondence that I expect from them. I will explain it little by little, for I want you to know the sentiments of my Heart.

God created man out of love, and placed him in such a condition that nothing could be lacking to his well-being on earth, until he reached eternal happiness in the other life; for this he had to submit himself to the divine will, observing the wise and gentle laws imposed by his Creator.

But man, unfaithful to the law of God, committed the first sin and thus contracted the grave illness that was to lead him to death.

Man, that is to say, the father and mother of all mankind, was the one who sinned; consequently all his posterity were stained with the same guilt. The human race thus lost the right which God Himself had granted it to possess perfect happiness in heaven; henceforth man will suffer, suffer, die.

God needs neither man nor his services in order to be happy; he is sufficient unto himself; his glory is infinite; nothing and no one can diminish it. But infinitely powerful, he is also infinitely good; will he let man, created out of love alone, suffer and die in the end?

This is not befitting a God; on the contrary, he will give him another proof of love, and in the face of an evil of such gravity he will provide an infinite remedy. One of the three persons of the Most Holy Trinity will take on human nature and divinely repair the evil caused by sin.

The Father gives his Son; He sacrifices his glory and the company of his Peche, descending to earth, not as a rich and powerful lord, but in the condition of a servant, of a poor man, of a child.

The life he led on earth is known to all of you.