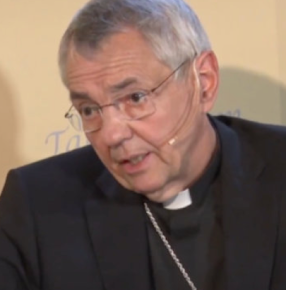 (LifeSiteNews) — German Archbishop Ludwig Schick has stated that rejecting other religions as a Catholic is a sign of “right-wing extremist tendencies” and that he sees these tendencies among “certain pro-life activists.”

Schick, who is the archbishop for the diocese of Bamberg, talked about the danger of “right-wing ideas” among members of the Church in an interview with domradio.de.

“Whoever is a Christian must stand up for freedom, for unity, for worldwide solidarity and worldwide charity, otherwise he does not deserve the name Christian,” Schick stated while condemning “right-wing ideas.”

Schick said that Catholics who hold to the teaching that the Catholic faith is the one true religion have “right-wing extremist tendencies,” which he clearly meant in a derogative way.

The German prelate appears to be at odds with Catholic teaching, as the Catholic Church has always held that it is the one true Church that Jesus Christ founded and that the Catholic faith is therefore the one true religion.

Bednarz declared that there are “people who consider themselves very pious,” who do not know “with whom they are sympathizing and what kind of enemy images they are adopting” when they support right-wing politicians.

Bednarz also criticized Pope Benedict XVI for his 2005 “Dictatorship of Relativism” remarks, saying they had led to “unacceptable statements” such as Swiss Cardinal Kurt Koch’s comparison of the German Synodal Way to some Protestant Christians in the Nazi era who tried to adapt their faith to the current zeitgeist.

“The problem is that some people who consider themselves very conservative and pious believe that their own attitude is the only true one,” Bednarz stated. “And instead of arguing, they get into this idea that there is a dictatorship of relativism.”

Critics of so-called “right-wing Christians,” like Schick and Podschun, often hold heterodox views, especially regarding the Church’s teaching on sexuality, and align themselves with mainstream narratives on issues like COVID restrictions.

Schick has called for female deacons and married priests in order to discover “sources of error” in the Church sooner. Furthermore, the German archbishop referred to people who criticized COVID-related mandates and questioned the mainstream narrative as “incorrigible Corona deniers who also often espouse inane racism and nationalism.” Schick also claimed that there was a “moral obligation” to take the experimental COVID shots.

Podschun and his Catholic youth organization supported the blessings of same-sex couples and called for changing Church teaching on sexuality during the heterodox Synodal Way.