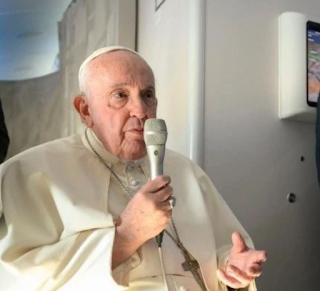 The 2019 Abu Dhabi heresy – claiming that God wills "all religions" – is something that came "from God” [= the devil], Francis said on his November 6 flight from Bahrain to Rome perverting the truth.

He admitted that the Abu Dhabi heresy had not been thought through, “None of us had this in mind. It emerged during a friendly lunch." For Francis, this is a "big thing” [= big scandal]. He invited Cairo Grand Imam Ahmed al-Tayyeb to a lunch where the idea for this heresy was born. He added that the Abu Dhabi heresy had been the basis of his [forgotten] encyclical Fratelli tutti.

On the subject of "equality" between men and women, Francis said that women had their own way of solving problems: "I have seen that in the Vatican, every time a woman comes to do a task in the Vatican, things get better," he revelled in sexism.

As an example, Francis cited the hiring of a female Vatican vice-governor ("and things have changed for the better") and the replacement of the six male lay members of the Council for the Economy with five women and one man: "This is a revolution, because women know how to find the right way, they know how to get ahead," he trumpeted his familiar black-and-white simplifications.

Unasked, he mentioned the inhuman abortion atheist Mariana Mazzucato, whom he recently appointed as a member of his Scandal Academy Against Life. "She is a great economist from the United States, I transferred her there to give it a little more humanity," he again perverted the truth, as the acceptance of abortion is the epitome of inhumanity.

When confronted with the 2021 resignation of Créteil Bishop Michel Santier for homosex voyeurism, he dodged the issue and talked about abuse in general.

Referring to the decadent German Church, Francis repeated his slogan: "Germany has a great and beautiful Protestant Church; I do not want another that is not as good as this one; but I want a Catholic one, in brotherhood with the Protestant one."

The Protestant state church in Germany is completely falling apart.