Biden: We must lead the NWO 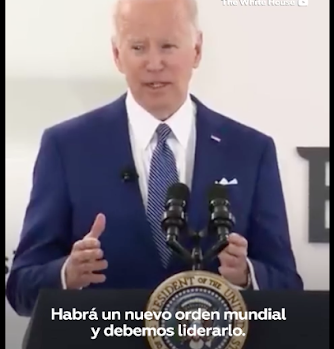 Although the president did not specify what this order will consist of, he mentioned NATO and US allies in the Pacific during his speech, affirming that they present "a united front".

US President Joe Biden predicted Monday that the world will experience a change in the international order and said Washington must lead the new system.

"Sixty million people died between 1900 and 1946. And since then, we have established a liberal world order, and that had not happened in a long time. A lot of people died, but nowhere near [there was] chaos," the president said during a meeting with businessmen in Washington.

"And now is a time when things are changing. There's going to be a new world order and we have to lead it. And we have to bring the rest of the free world together to do it," Biden continued.

Although the president did not explicitly lay out the problems facing the current world order, he devoted much of his speech to the conflict between Russia and Ukraine, stating that Washington needs to "do whatever it takes to support Ukraine." In that context, he stressed that "NATO has never been stronger or more united in its entire history than it is today, in large part because of Vladimir Putin".

In addition, the US president mentioned the Quadrilateral Security Dialogue (Quad) group, formed by the US, Japan, India and Australia and repeatedly criticized by Beijing as an anti-China tool in the Pacific.

"Japan has been extremely strong, as has Australia, in terms of dealing with Putin's aggression. We present a united front across NATO and the Pacific," Biden said.