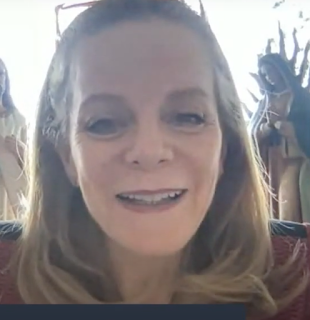 For 15 years, Mexican Luisa Lomeli was a teacher of Feng Shui, a New Age variant of Chinese witchcraft dedicated to harmonizing supposed energy currents similar to Reiki but, instead of in bodies, in spaces. Beset by strange events, she soon learned that God used another witch for her return to faith.

Luisa Lomeli was born into a Catholic family, received baptism, communion and went to school according to her faith. A life that, as she explains to Jaime Duarte, founder of the New Age Research Center (CISNE), contrasted with the absence of religious life in her daily life.

It didn't take him long to take his first steps in occultism and the New Age. "I started with neuro-linguistic programming, reiki, healing and became a Feng shui consultant healing the earth and houses... I was totally into the occult," she recounts.

In fact, she was one of the pioneers in introducing Feng shui in Mexico and a successful teacher of this discipline. From the beginning she was recognized as "an excellent witch. She believed she was helping the people who came to her, but later learned that the opposite was true. "You don't imagine that you are getting people into terrible things: you are consecrating the house and the people to Satan," she warns.

For years, apparent success accompanied Lomeli and the witches who followed her but the more influence she had, the more of a "failure" she felt. "I earned a lot of money that I was never able to enjoy, because Satan takes everything away from you and makes you live in misery. Sometimes I didn't even have enough to eat, it was all for traveling around the world and perfecting technique: he gave me fame and money and [the demon] took care of collecting it all from me."

Serving the devil "without control".

Luisa, increasingly "contaminated" by what she believed to be negative energies came to participate in a course to achieve clairvoyance, where through certain rituals she could "obtain powers, see beyond reality and access knowledge" hidden.

In one of the sessions she fell victim to the so-called "kundalini syndrome", an ailment that can be accompanied by psychotic outbreaks, the sensation of entering and leaving dimensions without control, hearing voices or having extrasensory experiences, and she also felt continuous tingling.

That would be nothing compared to what would begin to happen to her some time later. "I was a witch [...] I became completely contaminated. When I hit rock bottom I stopped working, I suffered terrible things and at 3:00 at night I felt that something was trapping me. I went to see thousands of witches and shamans, but I couldn't find anyone to heal me," she says.

A witch led her to faith

Sunk, Luisa asked another witch for advice and she recommended a "recipe" for healing: she had to go to the Church and ask for "the Gospels to be imposed on her in Latin". It had been years since she had abandoned everything related to her faith, but when she entered she remembers feeling "peace and warmth".

"It was something shocking, I couldn't stop crying and I was very happy. I saw that the Eucharist was a miracle and when the Mass was over I was afraid to leave the Church. God is really here," she thought.

That day she stayed hours in the church, started going to Mass frequently and later learned to pray the rosary, but continued with her New Age practices, courses and materials.

"A few days later I felt tingling again and when I said I belonged to the Church, the demons began to attack. Horrible things happened to me," she explains.

Only then was he aware that he had opened doors he would never have imagined. "When I went to confession, the priest sent me a rosary that I had no idea how to pray. [From then on] I prayed seven rosaries a day, I was in church all morning and spent years with many exorcists, but little by little I began to have my heart in the Church," he says.

He also recalls that during his conversion "terrible things" began to happen to him, which he later understood as a way of the devil to make him think that he did not have to continue on that path.

Today, he continually warns from his own YouTube channel and in the interviews he gives so that no one "gets into that, there is no way out". She also addresses those who, like her, are considering abandoning occult practices and advises them to "get all the New Age stuff out of the house. A year later I threw it all out," she says.

After "an extremely painful process" detaching herself from a life devoted to occultism and witchcraft, Luisa warns her followers not to start getting involved in this type of practices and thanks "the reward of a God who does not let Himself be won over by blessings", among others the conversion of her family, the end of her spiritual attacks and even the job she got by remaining without any dedication as a witch and Feng shui instructor. Currently, she is dedicated to the accompaniment and counseling of families from the faith.