Jesus visited him every night 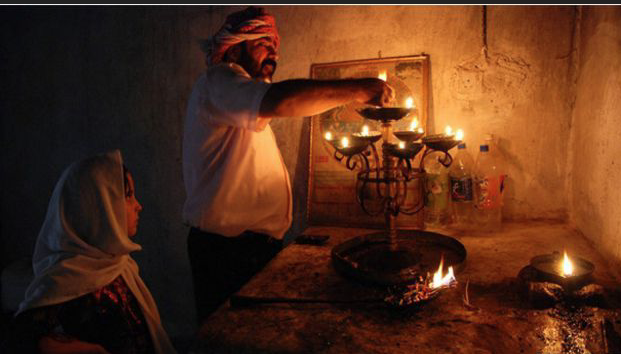 'Jesus Visited Him Every Night': Middle Eastern Missionary Shares Amazing Story of God on the Move

During this season of Ramadan, CBN News is recounting some remarkable stories from recent years about how Jesus Christ has supernaturally revealed himself to Muslims in dreams and visions.

In one such instance, a Middle Eastern missionary shared a remarkable story of how Jesus visited a man in the region every night for a month, asking the man to write down what he said.

It turns out, the missionary said, that Jesus shared the entire book of St John with the man, who lived more than 30 miles outside a city in the Middle East known for its extreme use of opium.

Yazid lives and works in a part of the Middle East where it's against the law to share the gospel of Jesus Christ and even life-threatening to talk about the advancement of the gospel.

He spends his life sharing the gospel among Muslims who have never heard it. "God is moving inside the Middle East with dreams, visions, and personal visitations," Yazid shared.

He went on to say that a man shared his amazing supernatural encounter with God: "'A man wearing all white knocks on my door every night, and I couldn't look at him because his face was so shiny and bright. When he would come inside, he asked me to write down what he said. And as I wrote, I would fall asleep. And then, the next night, he would come again... for the next month.'"

Yazid asked the man, "What did you write? May I see your notebook?"

"He had the whole book of St John verbatim in his notebook," said Yazid. "This is amazing. Jesus visited him every night until he finished the book."

"This is amazing thing that the man actually asked us, 'Who was this man that he visited me?'" Yazid continued. "And here, I learned a very valuable lesson: God will do his part, but we still have to do ours."

Pray for Muslims during this season of Ramadan that they would encounter the living God, Jesus Christ.

The Bible records numerous visions of Jesus and angels speaking to people, so we know God does choose to speak to people in this way at times.

The Apostle Paul describes how Jesus appeared and spoke to him in Acts 9:1–19; 22:6–16; and 26:12–23. Paul recounts the voice of the Lord said, "'I am Jesus of Nazareth, whom you are persecuting,' he replied. My companions saw the light, but they did not understand the voice of him who was speaking to me."

In Acts 9:10, the Lord speaks to a disciple named Ananias in a vision. In Acts 10:3, an angel of God appears to Cornelius and gives him directions.

And in Revelation 1:12-17, Jesus appears to John the apostle in a vision:

"I turned around to see the voice that was speaking to me. And when I turned I saw seven golden lampstands, and among the lampstands was someone like a son of man, dressed in a robe reaching down to his feet and with a golden sash around his chest... His face was like the sun shining in all its brilliance. When I saw him, I fell at his feet as though dead. Then he placed his right hand on me and said: 'Do not be afraid. I am the First and the Last.'"