The Church succumbs to the Bergoglians 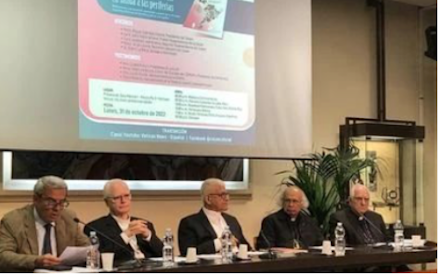 The Latin American Bishops' Conference (CELAM) published a 146(!) page document on 31 October as the result of months of brooding towards a further dilution of the faith, including a "time of listening" that began in April 2021.The document's title (“Toward a Synodal Church Going Forth into the Periphery”) sounds like a mischievous parody of Francis' party language. The text consists of an indigestible word salad about ecology, natives, "overcoming clericalism", more lay participation and the fight against "violent practices towards Mother Earth".Curiously, the document does NOT call for the [invalid] ordination of women, but proposes assigning apostate priests who have married to "new tasks" in parishes [to give them another chance to fail].Although homosexualism is widespread in the Novus Ordo group, CELAM condemns an ecclesial "indifference" and "rejection" of phenomena that must indeed be rejected, such as homosexualism.The document complains that homosexuals have expressed a desire to be recognised as "Christians committed to the faith" and to be treated "equally" according to the dignity received in baptism. "A sign of our times is the desire for our [Novus Ordo] Church to be welcoming and inclusive." To "welcome" sin and decadence is not a task of the [true] Church.Recently, a CELAM delegation presented this scribble to Francis, who instructed them to take it to the homosexualist Grech, secretary of the Synod.