Why Freemasonry hates the Virgin Mary 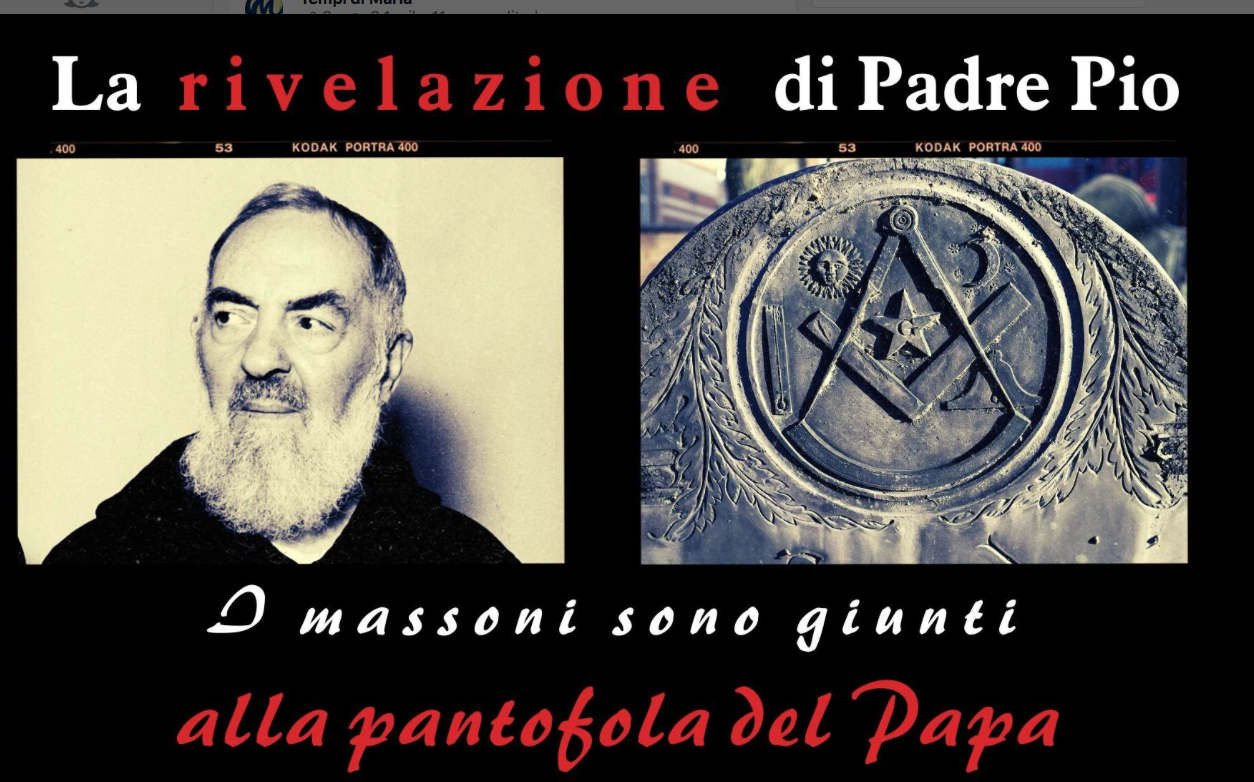 Padre Pio: "The Masons have reached the Pope's slipper".

BRING SOULS TO THE IMMACULATE! THIS IS THE ONLY HOPE

St. Pio, during his lifetime, had affirmed that the Freemasons have reached "the Pope's slippers", today we can affirm with extreme clarity that they have reached the throne of Peter. The feared external enemy, with all that serves him ideologically, acts today as an internal cancer in the Church.

Many corrupt cardinals, as cynical executors of the Masonic plan of destruction of the Church, act like the wolves in sheep's clothing mentioned in Sacred Scripture; it is useless to hide it, because they are perfectly identifiable by what they support, affirm and impose pastorally on the faithful, leading them away from the sound bimillenarian doctrine of the Catholic Church. They occupy important and strategic positions in the Church, and under the pretext of reforming it through "synodality", lately they are carrying out the final attack on the bimillennial doctrine of the Church, attacking the family, the liturgy and the priesthood.

These cardinals, modernists in fact, progressives in façade, who call themselves "reformers," have already achieved resounding results, such as blessing the divorced and homosexual couples with a form. They have won broad support for implementing access to ordained ministry for women and for the abolition of celibacy. They are also distinguished by a pronounced servility to the strong powers of the world, how not to mention, for example, their obsessive support for the new techno-scientific creed on vaccines, immigrationism, unbridled inclusivism and the ecological policy of the single globalist thought, which preaches "ecological conversion".

Typical is the new slogan spreading in parishes: "Let us no longer speak of sin against nature, but of sin against Nature". In the face of such a dark revolution, how can we fail to make a necessary mention of the apostolate of St. Maximilian Mary Kolbe, who, recalling St. Louis Marie Grignion de Montfort, proclaimed the urgent need to fight for the triumph of the Immaculate Heart of Mary, in opposition to the advancing Masonic forces.

Even then, when he fought for the Immaculate Conception, he considered that Mary's hour had come, and he was not mistaken, for his days were those in which the Masons feared the Marian cult so much that they would obstruct the secret of Fatima for a century, preventing the consecration of Russia to the Immaculate Heart of Mary. The enemies knew even then that Mary was their most dangerous enemy. St. Maximilian Kolbe felt the urgent duty to commit himself to spreading love and consecration to Mary, because he was aware that only when Mary reigned in hearts would Christ reign again in the world, and he succeeded with impetuous and ardent zeal in building up the little remnant of Mary.

However, the enemy cunningly managed to extinguish the burning flames of that impetuous Marian impulse, made of unconditional love for the Immaculate. The mission of St. Maximilian Kolbe, which today seems almost extinguished, must be taken up again with new impetus. Still burning under the ashes, it is necessary to pray for the Marian fire to be rekindled, in these times when the battle is at its peak and the Masons who worked very well and successfully to extinguish the mission of bringing souls to Mary, are reaping the best fruits.

Today the number of families, of young people, of priests who consecrate themselves to the Immaculate Heart of Mary is at a minimum: in fact Satan reigns in the world and over the Church more than ever.

It seems that this is the time of the undecided who wait, without doing anything, to be saved by the sudden and decisive intervention of the Immaculate. Instead, it is the time, as foretold by Montfort, for Mary's heroes to fight alongside the Queen of Heaven, to be terrible in the hour of battle. Souls faithful to Mary, the Coredemptrix, who ask for strength, courage and decision, to fight in favor of the holy Church and Christian civilization. Souls who desire to serve the Most Holy Trinity, begging: "Make us strong so that loving you with the love of the strong, we may be able to serve you with the dedication and efficiency of the strong, to reach your Kingdom on Earth as soon as possible, O Mary, O Jesus" (Dr. Plinio Corrêa de Oliveira).

Mary Most Holy, as Jesus revealed to Sister Maria D'Agreda, is "Queen and Lady of the Church Militant, her protector, her advocate, her mother and her teacher". You will be the special patroness of the Catholic kingdoms, and if they, the other believers and all the descendants of Adam invoke you from their hearts, obey you and bind you to them, you will provide them with a remedy and succor them in their sorrows and needs.You will be the friend, the defense and guide of all the just, our friends: you will console them, comfort them and fill them with good things, to the point that they bind you to their devotion."

To promote and spread devotion to Mary is the imperative that we must set ourselves, with no ifs and buts, assuming the mission of St. Maximilian Kolbe.

In fact, Jesus reveals to us: "We do not want to grant anything to the world unless it is from your hand, nor deny it anything that you grant it. On your lips will be spread the grace of what you will establish in heaven and on earth, where angels and men will obey you, for all our things are yours as you have been ours without ceasing, and you will reign with us forever" (Excerpt from: The Mystical City of God by Sister Maria de Agreda, Chapter 22, Book 8).

Today, ecclesiastical Freemasonry, as never before, has diminished and minimized its power of intercession, souls are slow to turn to it, to be led by its intercession for the Lord; many Christians allow themselves to be entangled by the devil's cords in new heresies, sinners multiply and guilt increases. We can imagine, especially by studying the messages of recognized Marian apparitions and so many authorized private revelations, with how much suffering Our Lady sees the believers and all humanity in the dangerous state in which they find themselves, even though the Church knows that she, by virtue of the "place" she occupies in Heaven, is their advocate and protector, to guard them, help them and direct them towards beatitude.

Many, today, do not know her, and no longer have recourse to her, and because they do not invoke her, they are lost in great numbers, seeking condemnation for themselves and denying her above all the glory of saving them. Nevertheless, the Almighty still intends, through the mercy and indulgence of the Queen of Heaven, to favor the greatest possible number of souls, if they know how to obtain the mediation of this precious Advocate, who is always obliged to intercede with Him.

In this time of deep apostasy and bloody spiritual battle, where too many souls are lost conquered by the ancient Dragon, the Blessed Virgin, Queen of the Church, is the only sure way for the ecclesial community to improve, for Catholic nations to be rebuilt, for the faith to expand, for families and states to be strengthened, for souls to return to the grace and friendship of Her Majesty.

Bringing souls to Mary Most Holy is the only road to travel and the only mission to fulfill with perseverance.