Stop the evil communion in the hand --Schneider 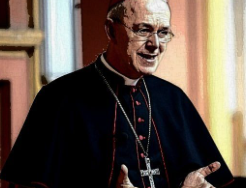 Bp. Schneider: Communion in the hand a ‘grievous evil’ that must be stopped

Bishop Athanasius Schneider, in a new interview with John-Henry Westen, discussed many important topics relating to our current crisis in the Catholic Church.

(LifeSiteNews) — Bishop Athanasius Schneider, in a new interview with John-Henry Westen, discussed many important topics relating to our current crisis in the Catholic Church. He told John-Henry Westen that he is convinced that, in spite of attempts at restricting the Traditional Latin Mass, “the Vatican will not succeed to forbid totally the Traditional Latin Mass.”

He also insisted that the Society of St. Pius X is not in schism and that therefore faithful Catholics are free to attend their chapels. And finally, the Kazakh prelate urged Catholics always to receive Our Lord in the Holy Eucharist on the tongue and not on the hands.

The bishop of German descent was very convinced that the Traditional Latin Mass will not die. Two generations now have been able to grow up in that traditional rite of the Mass and to live in it. Therefore, the Vatican “will not succeed.”

“They will cause a wide, large counter-reaction because there will be the good Catholics. They will go underground and they will not stop them,” Schneider expounded.

That is to say, Bishop Schneider predicted that many traditional Catholics – and their priests – will go underground, rather than abandoning the ancient liturgy and its sacraments.

“Their faith is so strong, and this prohibition will be probably a dead letter and it will not last long,” Schneider predicted.

Asked by John-Henry Westen about the claim that the Society of St. Pius X (SSPX), which exclusively uses the traditional Latin missal and the traditional sacraments, is in schism, Bishop Schneider responded with the words that the SSPX is “surely not schismatic.”

In the bishop’s eyes, it is “a very narrow, legalistic view of the reality of the Church” which would lead to such a conclusion. Such a view is “putting the letter of the Canon Law above the importance, the primary importance of the fullness of the Catholic faith and of the traditional liturgy.”

Bishop Schneider also sees a need to further clarify the term “schism,” which, together with other terms, are “subordinated” to the “greatest law of Canon Law, which is the salvation of souls.” For example, one criterion is whether or not one wishes to have “a canonical community with the Pope,” which is most prominently manifest by praying for the Pope during the celebration of the Holy Eucharist.

The Kazakh bishop, who had been one of the visitors of the Holy See during the official visitation of the SSPX six years ago under Pope Francis, insisted that the SSPX always pray for the Pope and the local bishop in their Masses, as well as chanting “in public” prayers for the Pope. Therefore, the prelate challenged those who claim that the SSPX is in schism to “visit at least their seminaries… their parishes, their families, their youth.” And they “will be moved” by the attitude by this group of Catholics.

Furthermore, Bishop Schneider pointed out that “Pope Francis granted … habitual, ordinary, universal faculties of confession to the priests of the Society of St. Pius X.” In addition, by granting the SSPX the right to assist at marriages with approval of the local bishops, the Pope is exercising his “jurisdictional” powers. How could he exercise such a power over a schismatic priest?

By granting these faculties to the SSPX, the bishop went on to say, the Pope is declaring “de facto, implicitly,” that “they are not schismatic.”

Insisting that Archbishop Marcel Lefebvre desired to be “fully recognized by the Holy See,” Bishop Schneider pointed to the “emergency situation” in the Church – even quoting Cardinal Gerhard Müller’s words about the “hostile takeover of the Church” – as an explanation for the irregular status of the SSPX. In his view, that the SSPX “is not able currently, temporarily, to be fully under the control and submission of the Holy See is justified and is in no way schismatic.”

Asked by John-Henry Westen about the topic of Communion in the hand, Bishop Schneider became very serious and stated that “Communion in hand is one of the grievous phenomenons and evils within the Church.” He explained his judgment by saying that it is “the most grievous because we are trampling Our Lord under our feet in our churches.” It is “the Lord, His Majesty, hidden in this tiny, small fragment of the host or a particle, part of the Host, [that] is trampled.”

“This is so grievous and evil,” Schneider insisted. “We must, as soon as possible, stop this … Enough!”

In this context, the prelate added that the COVID lockdowns – where often bishops took even more measures than those prescribed by the state – were “a lamentable demonstration of the state of faith of these bishops” who took more care of “temporal” rather than eternal cares.

Bishops and priests who participated in these lockdowns “will have to answer before “the Eternal Judge, Jesus Christ,” Schneider said.