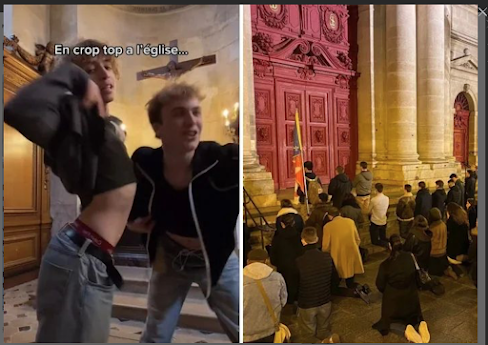 Father Pierre Vivarès of Saint-Paul-Saint-Louis in Paris, a church recently desecrated by a half-naked homosex dancer, lodged a complained against the dancer – and against the young people who made atonement after the infamy.

During their prayer, a parishioner came out of the church and congratulated them. Five non-believers stopped to support them while Vivarès sees no difference between the blasphemer and the youth Catholics for whom he refused to open the church.

Vivarès accuses both of having “provoked the public opinion,” “used his church for personal aims,” and utilised "the dictatorship of the image and the buzz" while those you prayed – according to Vivarès - “perverted the event.”

Eric Zemmour, the Jewish anti-Islam candidate for the 2022 French Presidential elections, strongly supported by many Catholics, took to Twitter.com to proclaim that "I disapprove of those who kneel in the kneel in the street to pray." He could have remained silent.