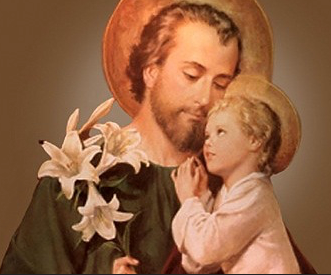 Gaspard Ricard was a young shepherd, only 22 years-old, and he spent his days minding his flock on Mount Besillon, near the town of Cotignac in the South of France. T'was a sweltering summer in the year 1660.  Young Gaspard was an ordinary French man and in his humility he did not expect that he was about to meet the Saint who God the Father had entrusted with His Son. Although, Gaspard was a shepherd and they are especially favored with heavenly visions.

One especially hot day, Gaspard drank his flask of water dry. In the debilitating heat, he found that he was dying of thirst. He didn't dare leave his livestock, that would have meant certain ruin. But he was dangerously dehydrated. Suddenly, a tall man who had a noble bearing came up to him, and said, "I am Joseph." There was a boulder near Gaspard and Joseph said, "Lift this rock and you shall drink." The order disturbed Gaspard who protested that he was not strong enough to move it. Joseph repeated, "Lift this rock." Gaspard handled the rock and to his amazement, he found that he rolled the rock with ease. At that very second, pure water spurted from the place where the rock had been stationed.  Gaspard took his fill of water and turned to thank the man of regal bearing, but the man had disappeared.

The young shepherd was so astonished that he sped to the town of Cotignac and told the locals all that had happened. They were impressed by his sincerity and they followed him to the pasture where a spring was spurting pure water. Their attention was riveted by the boulder which they doubted Gaspard could have moved on his own. Their suspicions proved correct because it took 8 strong men to move it. Then it dawned on Gaspard that the tall man with the commanding presence was St Joseph!

News of this supernatural spring went all over France. Soon, people were traveling in their horses and buggies (this was the year 1660) from all over France to see this special spring. It was the site of miraculous healings, and I have tried to find accounts of such miracles, but to no avail. The healings of body and soul that were taking place at the spring became a national sensation, and they even impressed the King of France! King Louis XIV was inspired to consecrate the oldest daughter of the Church, la belle France to St Joseph and the King did so on March 19, 1661, only 9 months after St Joseph appeared to young Gaspard in June of 1660. I checked to see if St Joseph appeared on his day which is Wednesday, but he came to Gaspard on Monday, June 7th.

The account of the supernatural spring being uncovered when the boulder was rolled away calls to mind an event in my own life that actually shocked me a little and which I've been slow to share because I've needed time to make sense of it. We bought a coffee table from a master French artist - it is a slice of a tree trunk - which you may see in the photo below. It was an exceptionally heavy table and we found it during the time I was starting the year of 2021 with a novena to St Joseph. We could not lift it, and wondered how we would get it inside, and so as I was praying to St Joseph for big intentions, I asked him if he could help us get this weighty table inside our abode. Surely enough, a grace came two days later when there was a meeting at our place and a big group of men were able to move the table inside the house. It took these young, strapping men a lot of effort and their hands were all over the varnished wood.

But it was parked on our rug just in time for me to finish the 9th day of the novena to St Joseph. Immediately after offering the prayer, I sat down to have a black coffee (I like my coffee bitter). As my hands fluttered over the edge of the table to retrieve my cup, I felt 3 pin-pricks. Yes, 3. I stared at my hand and saw what looked like thick blond hairs pricking my fingers. Splinters. I stared in disbelief because I had fretted about praying to St Joseph because of what I had metaphorically referred to as...splinters. In years gone by, I had experienced unexpected suffering after the intercession of St Joseph, which because he was a carpenter I had thought it clever to call splinters. And just after I completed 9 days of prayer to St Joseph, I had splinters sticking out of my hand. No one else who handled the table had gotten splinters. We got it from Alex, a true perfectionist from Paris who is fastidious in making sure every single piece of furniture is sanded down to sublime smoothness and then a large group of men had put their hands on every side of the table so they could move it and none of them had been pricked by a splinter. It was almost as if St Joseph was saying to me, "You say to expect splinters when I answer a prayer, here are some splinters."

The splinters did not come out that easily, they were like long thorns and we needed all the light from our phones trained on my hand and a tweezers to take out the most stubborn one that had slipped into my thumb. To be fair though, I doubt I'd be writing this were there not witnesses because I could easily look like a liar.  The splinters were a tiny suffering though, and it was like St Joseph was saying to me that I need not fear his splinters.

May I wish you and yours a very happy feast of St Joseph!

The account of the supernatural spring on Mount Bessillon was informed by Father Donald Calloway's Consecration to St Joseph which you may get in the Spirit Daily bookstore. 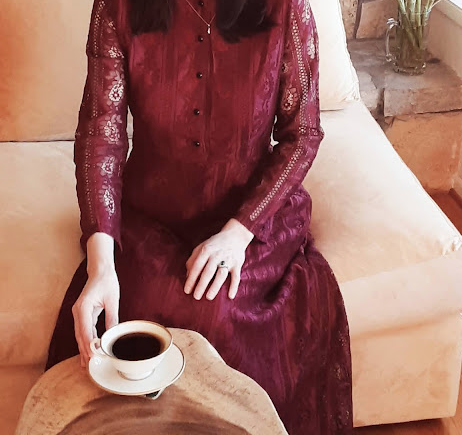