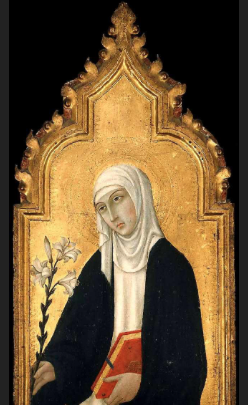 Yes, Women! Despite the prejudice that the pope’s authority is absolute, and the role of women non-existent in the Church, there have been women, yes, especially women, who corrected popes throughout Church history, Francesco Agnoli writes on Il Settimanale di Padre Pio.

Head of Church Is Sick. St Elizabeth of Schönau who died in 1164, wrote in her Liber viarum Dei: "The head of the Church is sick, and its members are dead for the Apostolic See is dominated by pride and characterised by avarice. It is full of wickedness and sin and scandalises my sheep and leads them into error, instead of guiding them rightly.” Some decades later, Saint Lutgard of Tongres, another nun, who died in 1248 publicly reported that Innocent III, certainly a good pope, would serve his sins in Purgatory until Judgement Day.

Full of Filth and Greed. Another strong woman was Saint Catherine of Siena who died in 1380. She wrote several letters to popes, in particular to Gregory XI and Urban VI, good and well-meaning popes. She told them clearly that the crisis of the faithful stems from the bad conduct of the clergy. Quote: "I have heard that you have appointed some cardinals. I believe that it would be an honour to God and an edification for us if you always chose virtuous men. If you do the opposite, it will cause great dishonour to God and damage to Holy Church! In that case, we are not surprised if God sends us his punishments and corrections." In another letter, she wrote that the “ecclesiastical superiors" are "full of filth and greed."

How Did the Popes React? In Letter 302, Saint Catherine invited Urban VI, to be less harsh. Quote, "In authority you can do everything, but in sight you are no more than a man (...) and I know that you wish to have people to help you: but you must have the patience to listen to them." She also invited Urban to correct his bad temper. Quote, "Mitigate a little those sudden outbursts, that your character urges you to do. By your holy virtue, fight and overcome your violent temper." Or, “Do not be negligent." Or, "If I were you, I would fear that divine judgement would come upon me". How did the popes react? They listened and even asked her for help.