Cardinal: no room for climate skeptics 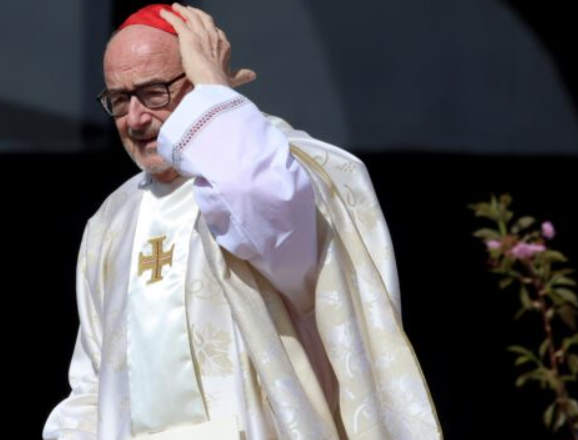 Vatican Cardinal: No Place for ‘Skepticism and Denial’ of Climate Crisis

Breitbart. ROME — Vatican Cardinal Michael Czerny insisted Tuesday there is no place for discussion with those who doubt or deny the “climate crisis.”

Over the past seven years, “the environmental crisis of our common home has worsened drastically,” declared Cardinal Czerny, who like Pope Francis is a member of the Jesuit order.

The cardinal’s words came during a presentation in the Vatican of a new documentary film celebrating the pope’s “great encyclical letter Laudato Si,” a 2015 text dealing with care for the environment and the climate crisis.

“Apocalyptic floods, mega-droughts, disastrous heatwaves, and catastrophic cyclones and hurricanes have become the new normal in recent years,” Czerny said, and tomorrow, “they will get worse.”

“From climate disruption and environmental degradation flow loss of lives and livelihoods, forced displacement, and violent conflict,” he added. 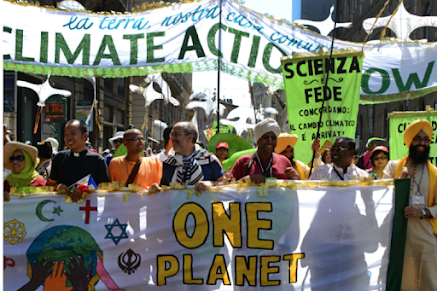 (Image, 2016) Activists display banners calling for action against world poverty, climate chanege and other environmental issues as they arrive on St. Peter's square prior to Pope Francis's Sunday Angelus prayer on June 28, 2015 at the Vatican. The activists included Christians, Muslims, Jews, Hindus and those of other denominations calling for the adoption of an ambitious legally binding global agreement on climate change at the forthcoming UN conference in Paris, December 2015, along with calls for action against world poverty and other environmental causes.

In the course of his presentation, the cardinal insisted that what is needed to effectively combat the climate crisis is inclusive “dialogue.”

“For this dialogue to be authentic, all voices should be heard,” he declared, adding that “we need a conversation that includes all stakeholders.”

Despite his call for open dialogue, however, the cardinal went on to assert that there is one exception to this rule, namely, those who question the climate crisis.

The ecological crisis “has arrived and is happening now,” he stated. “The time is over for speculation, for skepticism and denial, for irresponsible populism.”

“This beautiful film – a heartbreaking yet hopeful story – is a clarion cry to people everywhere: wake up! get serious! meet! act together! act now!” he exhorted.

Surely one of those whose voices should be silenced is Australian Cardinal George Pell, who has warned against the Catholic Church buying into climate alarmism.

“The climate change movement is now a worldwide financial colossus, ruthless and intolerant, colossally expensive, a useful substitute for religion for too many,” Cardinal Pell wrote in his 2020 book Prison Journal.

“Unfortunately, many in the Vatican have jumped onto the climate change bandwagon, despite the encyclical Laudato si’ twice acknowledging that the Church should leave science to the scientists,” he wrote. “It could be a mistake like the one the papacy made with Galileo.” “I suspect history will judge the emphasis on the threat of climate change as bizarre,” the cardinal proposed. “The climate is always changing, and, despite the bluster, we don’t know what raises global temperatures.” While in many places “it is political suicide to be sceptical of or hostile to the climate-change movement,” Pell wrote, “someone will cry out eventually that the emperor has no clothes.” 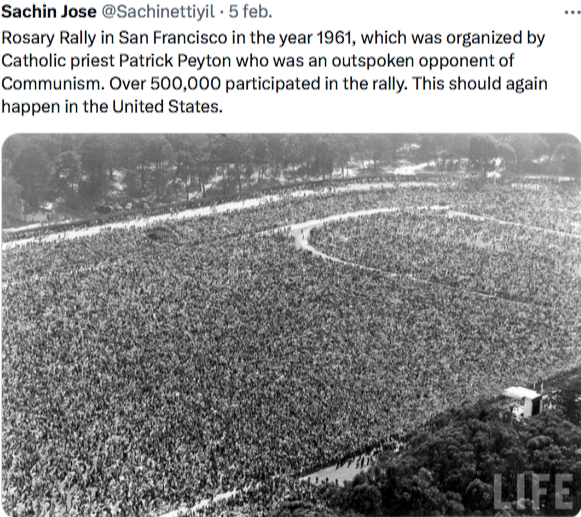 500,000 Americans gathered to pray the rosary 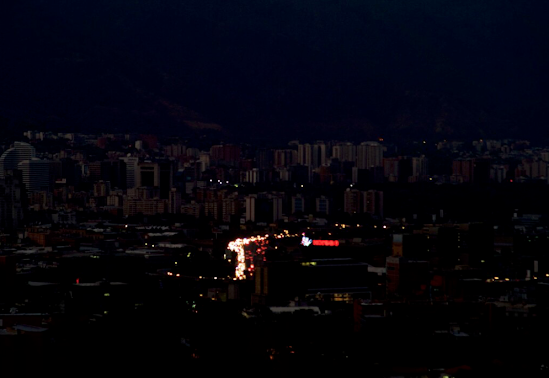 Prepare yourselves for the Warning!

Carbonia 04.02.2023 Mary Most Holy is with you, handmaid of the Lord. Put all your love for Jesus, my daughter, and do not allow yourself to deviate from His Laws. Heaven is now waiting to recover its Sons, God the Father weeps all His sorrow for those who do not want to listen to His Call of Salvation. Beloved Sons, prepare for the Warning! The thunder is felt throughout the Earth, the clouds in the sky are preparing to discharge torrential rains, the world will change its appearance, fire will suddenly break out  and the acrid smell of corpses will be everywhere. My children, this message is not a joke, but it is what Heaven announces so that its children may be prepared for the event. My charity is in all of you who listen and follow my Son Jesus, He is the one who will give you joy and eternal life. A satellite is about to fall to Earth and others will follow. The Earth's rotation is being influenced by the affected solar vortex. I must inform you that soon you will be in great 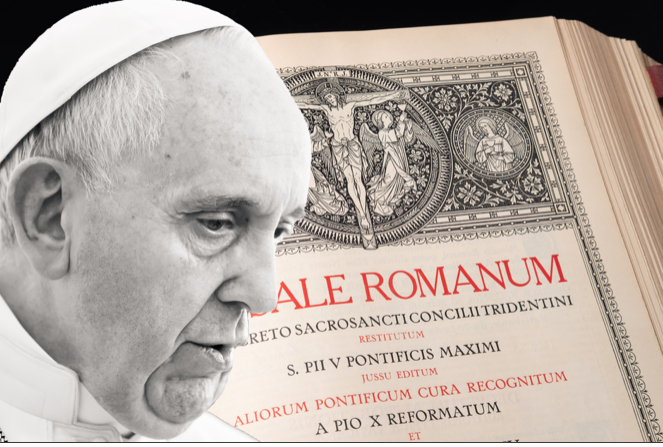 Don’t underestimate Bergoglio. He is evil, but clever

Details emerge: Bergoglio’s rumored Next Attack on the Traditional Latin Mass The false pope is determined to protect the world from the liturgical books of 1962… On Jan. 14, 2023, the German indult blog Summorum Pontificum reported on a credible rumor about “Pope Francis” and his liturgical henchmen preparing another, more severe set of restrictions for the use of the Roman Missal of 1962, after the implementation of Traditionis Custodes has apparently been too lackluster and too slow for the man whose real name is Jorge Bergoglio: Francis rumored to be preparing new Decree against Traditional Latin Mass Today, Feb. 4, the same blog confirmed the original post and shared additional information leaked by an informant inside (or close to) the Vatican. In a post entitled “More than just Rumors – News from the Swamp” (Mehr als nur Gerüchte – Neues aus dem Sumpf), editor Michael Charlier has revealed some explosive details about the decree that is expected to be released before Easter. Acc 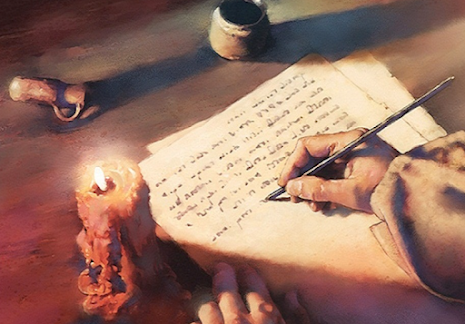 Prophecies about a Pope fleeing Rome

There are many Catholic prophecies - from important people such as popes and saints - about a Pope fleeing Rome or a revolution there. Some attribute it to the rise of the antichrist within the Church, others to communism. But most mention the fact of the Pope going into exile. Pope St. Pius X made known: "I have had a terrible vision: I do not know if it will be me or one of my successors, but I saw a Pope fleeing from Rome among the corpses of his brethren. He will take refuge incognito somewhere and after a short time he will die a cruel death". In 1917, the same revelation that Pope St. Pius X had a few years earlier was revealed to three little shepherds in Fatima, Portugal, only even more precisely: "We saw a bishop dressed in white, whom we had the presentiment was the Holy Father, fleeing from a city in ruins, trembling and with a faltering step". John of Rocapartida : "At the approach of the End of Time, the Pope and his cardinals will have to flee fro 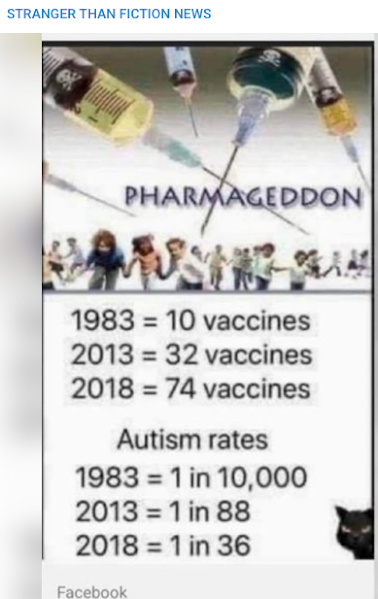 A letter from Hell 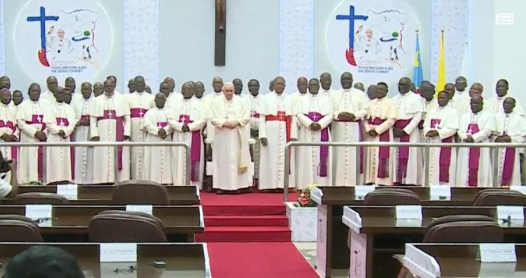 Francis alters the Sacrament of Confession

Francis Preaches Cheap Absolution In a February 3 speech to the bishops of the Democratic Republic of Congo, Francis made a mockery of the sacrament of confession. He urged the bishops to “be merciful” and to “always forgive” [only politically correct sins]. Francis never forgives when someone is a Catholic. “When a member of the faithful goes to confession, he or she comes to seek forgiveness, to ask for the Father’s caress," he romanticised the faithful and accused the priests, "We, pointing an accusing finger, say: ‘How many times? And how did you do it?’ No, not that." The doctrine teaches us that one must confess the exact number of mortal sins and if one cannot confess an approximate number, also the species of sin that increases or decreases its gravity. Therefore, Bergoglio changes on a whim what is established by the Church for the forgiveness of sins in Sacramental Confession. According to his advice, confessions would become an empty ritual and the priest a ma