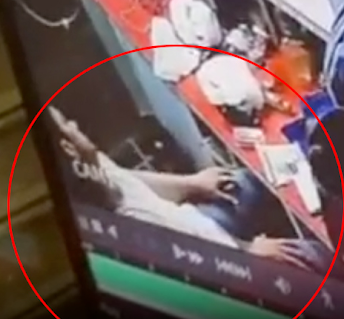 Infowars --A gym trainer in India was caught on film dying from a heart attack while he did little more than sit in a chair.

The footage out of Ghaziabad shows the 33-year-old man, identified as “Adil,” carrying out normal daily tasks at his real estate business office when he sits in a chair and appears to be short of breath.

Surveillance footage shows Adil sit up momentarily before slumping back.

The video also shows three men helping carry Adil’s body out of the office to give him medical attention.

“His aides rushed Adil to the hospital nearby but he died on the way,” reports NDTV.com. “He owned a gym in Shalimar Garden area of Ghaziabad and used to exercise daily.”

Speaking to The Times of India, one of Adil’s friends described him as extremely fit.

“Doctors at the hospital told us he had suffered a cardiac arrest and died on the spot,” a friend said to the Times, adding, “He used to train for around three to four hours in the gym daily and had won several medals in bodybuilding competitions.”