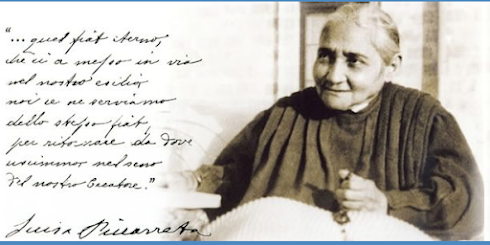 As I was in a state of abandonment on the part of my adorable Jesus, I felt my poor heart crushed by the pain, as though under a press. O God, what an unutterable pain! While I was in this state, I saw my dear Good almost like a shadow, but not clearly; I only saw one hand clearly, which seemed to carry a lamp which was lit. He dipped His finger in the lamp and anointed the area of my heart, embittered to the summit by the pain of His privation. At that moment I heard a voice saying; “The truth is light, which the Word brought upon earth. Just as the sun illuminates, vivifies and fecundates the earth, so does the light of truth give life and light, and it renders souls fecund with virtues. Even though many clouds darken this light of truth, which are the iniquities of men, in spite of this, it does not cease to send forth glimmers of vivifying light from behind the clouds, so as to warm souls. And if these clouds are clouds of imperfection and of involuntary defects, this light, piercing them with its heat, makes them vanish and it penetrates freely into the soul.”

I understood that the soul must be attentive not to fall even into a shade of voluntary defects, which are those dangerous clouds that prevent the entrance of divine light.

This morning, after receiving Communion, I saw my adorable Jesus, but completely changed in His appearance. He seemed to be serious, all distant, in the act of reproaching me. What a tormenting change! Instead of being relieved, I felt my poor heart more oppressed, more pierced, before such an unusual presence of Jesus. Yet, I felt all the need for a relief from the pains of His privations suffered in the past days, which were such that I seemed to be alive, but agonizing and in a continuous state of violence. But blessed Jesus, wanting to reproach me because I was looking for relief in His presence, while I was to look for nothing but suffering, told me: “Just as lime has the virtue of cooking the objects which are thrown into it, so does mortification have the virtue of cooking all the imperfections and defects which are present in the soul. And it reaches the point of spiritualizing also the body, surrounding it like a circle, and sealing all virtues within it. Until mortification has cooked you well – both the soul and the body, to the point of undoing it – I will not be able to seal in you, perfectly, the mark of my crucifixion.”

After this, someone – I can’t really tell who he was, but he seemed to be an Angel – pierced my hands and feet through, and Jesus, with a lance which came out from His Heart, pierced mine, to my extreme pain. Then He disappeared, leaving me more afflicted than before. O, how well I understood the necessity of mortification, my inseparable friend, and how there was not even a shadow of friendship in me with mortification! Ah, Lord, bind me Yourself, with indissoluble friendship, to this good friend, because on my own I can only show myself all coarseness. And she, not seeing herself being welcomed nicely, uses all regards with me, and keeps sparing me, fearing that I may come to the point of turning my back on her completely. So, she never accomplishes with me her beautiful and majestic crafting, because as long as we remain a little distant, her prodigious hands cannot reach me, in order to be able to work me and present me to You as a work worthy of her most holy hands.