Putin Open to Talks With Pope 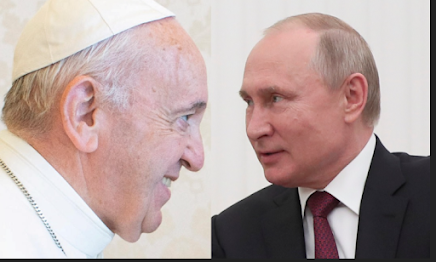 The version presented in the oligarch’s media is that French President Macron is trying to get both together. Francis received Macron for an hour on Monday and was asked by Macron to call Putin and Biden [!] to resolve the Ukrainian crisis.

Peskov replied that so far nothing has been said about anyone having to call Ukrainian President Zelenskyy and dealing with the legal framework that forbids any negotiations with Russia.

“We are ready to discuss all this with the Americans, the French, and the pontiff," he added. Until now, the US, the main war party in the Ukraine, has refused any talks with Russia.