Sr Natalia Magdolna's visions on the benefits of the Rosary 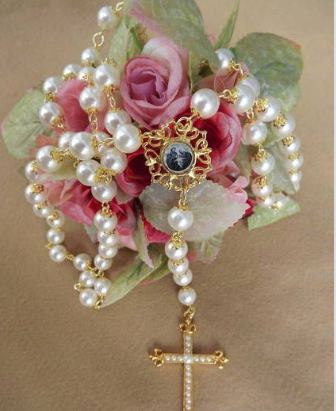 Prayer for the souls in Purgatory

One night Jesus asked me to pray for the souls in Purgatory. It was half past four o'clock and I wanted to finish writing my diary, when Jesus said to me:

-My daughter, although I respect your tiredness, I want to ask you not to go to sleep until you put in writing the state of suffering of the souls in Purgatory. I want My brother priests to join the crusade of prayer in favor of the souls suffering in Purgatory. Now I want to relieve those who during their life often asked Me and My Mother, in prayer, to have mercy on them at the moment of their death and when they were in the place of suffering.

Jesus then took Me to a place so large that I could not see the end. Although the place was dark, the souls there seemed to be calm. There were countless souls: they wore black clothes and stood close to each other. They all seemed motionless, speechless and very sad. My heart almost broke to see them like that. I knew that these souls received no help from anyone on Earth, no prayer, no sacrifices. They knew that the hour of their deliverance had not yet arrived but they were confident that it would not take long.

After that Jesus took me to another similar place. There the souls were shivering in their black robes. But when they saw me enter with Jesus, they all began to stir. I had my Rosary in my hand to pray for them. When they saw the Rosary, they all began to cry out, "Pray for me, dear sister, pray for me!" and they were trying to overcome their voices, shouting louder, asking for my prayers, like a cloud of bees. Although they all cried out at the same time, I could distinguish the voice of each one. I recognized many among them, people I knew when they were on earth. I saw some religious from other orders and also from my own. I was startled when a mother superior turned to me and humbly asked me to pray for her.

After this, a religious, an acquaintance of mine, with her hands joined and touching my Rosary, begged me: "For me, for me!", while a strange sweat, I don't know if it was in her soul or in her body, ran over her.

Then Jesus took me to a third place where there were countless nuns, standing still and without movement, while a strong sweat ran over them. They turned to me and begged me to pray the Rosary for them. There was light in that place. I thought, "Why should they be asking me for the Rosary?" Then Jesus showed me a Rosary, in which instead of beads there were flowers, and in each flower I saw a drop of the Blood of Jesus shining.

When we say the Rosary, the drops of the Blood of Jesus fall on the person for whom we offer it. The souls in Purgatory are continually imploring the saving Blood of Jesus.