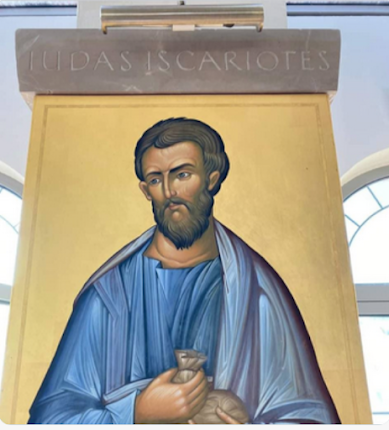 Devotion to Judas Iscariot, indirectly encouraged by Bergoglio on several occasions, is gaining strength.
This 'icon' (image) of the condemned Judas is exhibited in a church in Magdala, Israel, with only one difference: his name is not in gold and lacks a halo, as the rest of the apostles that accompany him do.
It is like having the portrait of your father's murderer hanging in your living room, but much worse, because the victim was Christ himself and it is the House where God lives permanently and not to be mocked by showing the faithful such a character as if he were a venerable example 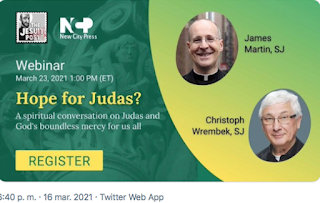 News of 2021 -What if there are no saints and saintly things to dedicate time and preaching to. The traitor Martin, who uses his "apostolate" to introduce the tender of sodomy among Catholics, and another fellow Jesuit, are lost in talking about Judas in a webinar entitled: Is there hope for Judas? No wonder they follow Bergoglio in that, for if there is hope for Judas, there would also be hope for them, equally murderers, but not of Christ, but of His doctrine.
"But, there is one thing that makes me think that the Judas story doesn't end there ... Maybe someone might think, 'this pope is a heretic ...' But, no! You should go look at a particular medieval capital of a column in the Basilica of St. Mary Magdalene in Vézelay, Burgundy [in France]," Francis said in 2017. 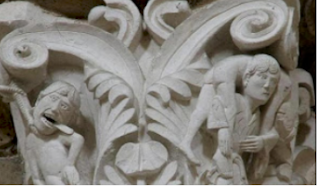 "On that capital, on one side is Judas, hanged; but on the other is the Good Shepherd who is carrying him on his shoulders and is carrying him," Francis said.
He revealed that he has a photograph of that two-part capital behind his desk, because it helps him meditate. "There is a smile on the lips of the Good Shepherd, which I wouldn't say is ironic, but a little bit complicit," he described.
It should come as no surprise that the one sinful figure in the Passion of Christ for whom Francis has more compassion, forgiveness, "moves" him more, is that of the Betrayer.
The (modernist) Church of Vatican II has a love affair with Judas Iscariot, and this is not by accident. The case for Judas is in its parade of universal salvation ("all shall be saved"), because Judas is the only specific individual that the New Testament reveals to be among the damned. In a sense, then, Judas embodies what they really want to totally erase from their consciousness: the reality of the eternal punishment of the wicked in hell.
The devil himself they have successfully relegated to the status of a silly myth, a cartoon character with a pitchfork that no one need fear. The Superior General of the Jesuits, "Father" Arturo Sosa, recently explicitly stated that Satan is just a symbol of evil, something for which Francis, otherwise so loquacious, did not, of course, criticize him in the least.
This is not the first time Francis has expressed himself in favor of the idea that Judas Iscariot might have been saved after all. For example, in an interview published in the German Die Zeit in March of this year, Francis hinted that Judas might not be in hell, since, although he did not ask for forgiveness, he nevertheless "repented." Unfortunately, he neglected to mention that Judas' repentance was not of the supernatural kind (contrition) and therefore was not able to procure forgiveness for him. The Iscariot was ashamed and grieved for what he had done, it is true, but he died in despair, taking his own life: "hanged, [he] burst in the middle, and all his bowels were poured out" (Acts 1). 18; see Mt 27: 5).
Maria Ferraz/Novus Ordo Watch