Communist China is a “Role Model for Many Countries” 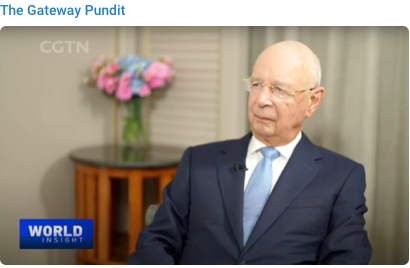 Old-fashioned socialist and founder of the World Economic Forum (WEF) Klaus Schwab, sat down with CGTN’s Tian Wei during the APEC CEO Summit in Thailand.

During the course of their discussion, Schwab was questioned about whether or not the leaders of the world were able to reach an agreement in order to forward their globalist agenda.

“Among the G20, you were there meeting some of the leaders as well. Professor Schwab, what do you make up the result? Finally, they put something as a statement, and it seems quite positive with all the voices included,” Wei said.

“I think it’s positive, it’s already positive. So the fact that everybody agreed about the statement, which we haven’t had the last years,” Schwab said.

It can be recalled that Schwab attended the recently concluded G20 Summit in Bali, Indonesia, along with another globalist, Bill Gates, where they promoted the “New World Order” to world leaders.

The G20 leaders issued a joint declaration at the end of the summit advocating for a universal standard on proof of vaccination for international travel and urging the creation of “global digital health networks to strengthen prevention and response to future pandemics.”

Other issues were approved by all members of the G20 bloc, including food and energy security, climate and biodiversity, health, and digital transformation.

Schwab added during the interview, “Now the base has been formed, but we have to go one step further. We have to have a strategic mood. We have to construct the world of tomorrow. It’s a systemic transformation of the world. So we have to define how the world should look like, and which we want to come out of this transformation period.”

Then, he went on to say that China is a “role model for many countries” for its “tremendous achievements.”

“I respect China’s achievements which are tremendous over the last over 40 years. I think it’s a role model for many countries. But I think also we should leave it to each country to make its own decision about what system it wants to adopt. And I think we should be very careful in imposing systems. But the Chinese model is certainly a very attractive model for quite a number of countries,” Schwab said.

“I look very much forward to have a strong Chinese voice in Davos to explain even better to the world what it means to see the Party Congress which lay down the principles of the policy, what it really means for global collaboration and for global development,” he continued.

UN report implicated the Chinese Government in “Crimes Against Humanity.”

“The report’s findings confirm wide-scale evidence of mass arbitrary detentions, family separations, torture, and religious persecution — and it concludes that Chinese authorities may have committed crimes against humanity,” according to Just Security.