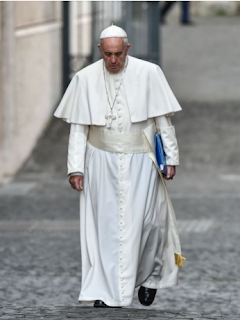 The ‘Working Document for the Continental Stage’ of the Synodal Way must be exposed as the Trojan horse of heresy that is, writes Gavin Ashenden

“All I need is a sheet of paper and something to write with, and then I can turn the world upside down,” claimed Nietzsche.

The culture wars are no friend of Catholic values. They have inherited from Nietzsche his preoccupation with “power” as the main driving force and “top value”. They are determined to achieve a change in our values and influence.

The way they have set about doing it is to play tricks with words. The trick is very simple. It sets out to use a word that looks very attractive at first sight but contains a hidden twist, so that it ends up meaning something different, perhaps even the opposite.

“Diversity”, “inclusion” and “equality” are just such words, but “inclusion” is the one that presents itself for decoding today, because it has been taken up by the authors of a document that is intended to inform the Synodal way, called “the Working Document for the Continental Stage”. (DCS)

It was released on Thursday 27th October at the Vatican’s Press Conference. Only 45 pages long, it sets out to turn the Catholic Church upside down (covertly using Nietzsche as a model).

The document is called Enlarge the space of your tent (from Isaiah 54.2.) The controlling idea it sets out to implement is that of “radical inclusion”.  The tent is presented as a place of radical inclusion from which no one is excluded, and this idea serves as a hermeneutical key to interpreting the whole document.

The words trick is easily explained. The association with being excluded is being unloved. Since God is love, he obviously doesn’t want anyone to experience being unloved and therefore excluded; ergo God, who is Love, must be in favour of radical inclusion. Consequently, the language of hell and judgement in the New Testament must be some form of aberrational hyperbole which must not be taken seriously, because the idea of God as inclusive love takes precedence. And since these two concepts are mutually contradictory, one of theme has to go. Inclusion stays, judgement and hell go. Which is another way of saying “Jesus goes and Marx stays.”

This is then applied to overturn all the Church’s dogmatic and ethical teaching.

Women are no longer to be excluded from ordination, LGBT relationships are to be recognised as marriage;  and then the real extension of the progressive ambition breaks the surface as there is the suggestion that polygamists are reached out to and drawn “within the tent of the Church”.

It would be a serious mistake not to realise that the progressive liberal mindset wants to change the ethics of the faith. So it replaces the categories of “holiness and sin”  with “inclusion and alienation”. The roots of this usage of the term alienation are of course found in Marx. But as our society has become more attuned to the language of existential angst, alienation has become the new terror, the new shibboleth. Sin and separation from God are not as alarming as alienation, angst and separation from society. The supernatural is replaced by the political.

The earliest chapters of Genesis unfold to show us that our deepest alienation is not from each other. It is a symptom of something more fundamental and causal: our alienation from God. In other words the supernatural and metaphysical takes priority over the political.

The spiritual training contained in the Law and the Prophets uses division and separation as essential concepts in our journey into holiness.

The experience of the Jews as the experimental people of God was of learning to distinguish between the holy and the profane, between sacred and secular. Division was everywhere as a means of distinguishing between the holiness of God and matter and alliances undedicated to Him. Anything separated from Him was devoid of life. The breaking of the umbilical cord of holiness which was the remedy to sin was shown to be fatal. And so the whole of life for the Jew was caught up in a division between what was understood to be sacred in the service of God and what was not.

Although Jesus was to declare all foods clean, the drama of separation shifted from the alienation of matter to the rebellion of spirit.

Jesus conducted an assault and repudiation on all that was evil. St John sets the drama of the Gospel in the clearest delineation between darkness and light, Good and evil.

The overarching narrative of the human race is the task of discriminating between good and evil. It is all founded on the gift of free will. We are dignified with the terrifying gift of freedom. Humanity is given the capacity to escape the confines of programmed subservience in order experience the Love of God, which turns into the adoration and praise of God.

But the gift and responsibility of free will is what allows evil entry into our world.

Exercising the possibility of making a choice against God is what instigates rebellion and then disorder into our intellectual, physical and spiritual experience.

Learning to discern, divide, distinguish good from evil, pro-God from anti-god, is at the heart of our journey home, a journey illuminated and made possible by Jesus.

Jesus himself deals with division and distinction all the way through His ministry and climaxes with the separation of the sheep and the goats at the end of time when the Son of Man comes in judgement.

God is often mis-presented rather vaguely as love; but he is also justice. Evil must be held to account and good must be acknowledged. This is a matter of justice as much as of Love. Justice and reality also require it. So division and distinction are central to the project that began with free will and ended with forgiveness, the bearing of our sins, and a freedom from hell as we are welcomed into heaven.

So the practice of discrimination is essential to the exercise of moral choice and so the integrity of our humanity.

The effect of the social and cultural outlawing of discrimination and division that the progressive and political Left have launched has terrible consequences. It is not just a project to replace the spiritual with the political. It also has the effect of obscuring the critical human task of telling the difference between good and evil.

What masquerades as kindness, the unconditional invitation to everyone to the Church fatally ignores the only condition the Gospels impose – repentance.

The removal of repentance is the sign that a different religion is being implemented. It is one that is constituted by a mixture of popular therapeutic truisms and populist political tropes.

The Church needs to be astute enough to realise that whenever there is an assault on the concept of discrimination, whenever it finds itself presented with inclusion, diversity and equality, another religion is being promoted. It is not Catholicism. It is not Christianity.

‘The Working Document for the Continental Stage’ (DCS) of the Synodal Way must be called out for the Trojan horse of heresy that it is.