The Creed is being "replaced by pagan homosexual ideology" —Müller 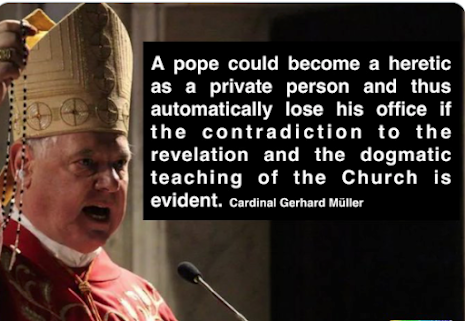 The Creed is being "replaced by the idol of pagan homosexual ideology" and the flag of victory of the Risen Christ by a homosex badge.

Müller notes that the synodal themes revolve exclusively and incessantly around sex as an egomaniacal source of pleasure. He says that "sexology" has replaced theology as the leading science.

The Cardinal cites the Protestant Barmer Declaration of 1934 against the National Socialist German Christians: "We reject the false teaching that the Church may abandon its message and its constitution to the whims or fluctuations of the prevailing ideological and political convictions of the day."

Neither a council nor a pope can change dogmas and introduce, for example, women's ordination or homosexual "blessings," Müller clarifies. A pope as a private person can become a heretic, leading to the automatic loss of his office, "if his disagreement with revelation and the dogmatic teaching of the Church is evident."

Müller does not explain how this automatic loss of office looks like in practice.