To take care of the dignity of worship 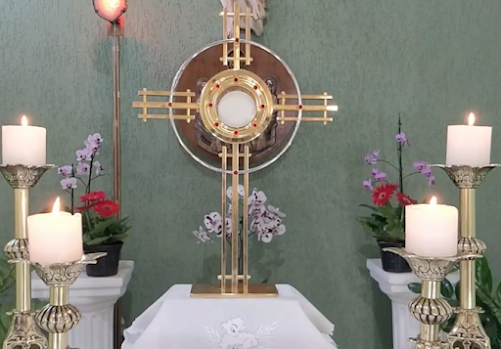 A great part of the prescriptions which the Lord communicated to Moses at Sinai tend to fix, even in their details, the dignity of all that had reference to worship. Thus he points out how the tabernacle, the ark, the utensils, the altar, the priestly vestments are to be constructed; how the victims are to be offered; what feasts are to be kept; what tribe and what persons are to exercise the priestly functions.....

All these indications show that sacred things are united in a special way to the divine Holiness; by them the Lord asserts the fullness of his rights. In that people, so often tempted by pagan rites, God always tried to instill a deep respect for the sacred. Jesus Christ emphasized this teaching in a new spirit. Precisely the zeal for the house of God, for his honor and his glory, constitutes a central teaching of the Messiah, which Christ realized by energetically throwing the merchants out of the Temple; and in his preaching he would insist on the respect with which divine gifts should be treated, sometimes with very strong words: do not give the holy houses to dogs, do not throw your pearls before swine.

Today we are witnessing in many places an atmosphere of desacralization. In these attitudes beats an atheistic conception of the person, for whom "the religious sense, which nature has instilled in men, is to be considered as pure fiction or imagination, and which must therefore be totally torn away from the spirits because it is absolutely contrary to the character of our time and the progress of civilization". At the same time, we see how divinatory practices, the disordered and unhealthy cult of statistics, of planning... are growing, even among people who call themselves educated: incredulity is everywhere. And the fact is that, in the depths of his conscience, man glimpses the existence of Someone who governs the universe, and who is not attainable by science. "They have no faith. -But they have superstitions.

The Church reminds us that God alone is our only Lord. And she has willed to determine many details and forms of worship, which are an expression of the honor due to God and of true love. Not only does she teach that the Holy Mass is the center of the whole Church and of the life of every Christian, and she has determined its liturgy; she has also willed that our churches be true houses of prayer. He has ordered that the temples be open at convenient hours "so that the faithful may easily pray before the Blessed Sacrament". He pointed out what has been a constant practice down through the centuries: the tabernacle must be solid, it must be in a prominent and at the same time recollected place, so that Christians can honor the Blessed Sacrament also with private worship. For this reason, the conopeo (the veil that ordinarily should cover it) is prescribed, and a wax lamp should burn constantly on the altar of the Tabernacle..., although these details are in the first place manifestations of love and adoration of Jesus Christ, really present, and only in the second place signs indicating his presence. All the faithful, priests and laity, must be "so careful of divine worship and honor that they can rightly be called zealous rather than lovers... so that they may imitate Jesus Christ himself, whose words are these: The zeal of your house consumes me (Jn 2:17)".