We must always influence others for good 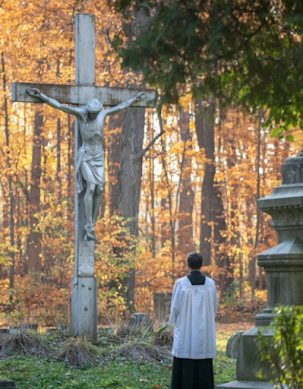 St. Paul, following the example of his Master, asks Christians to beware of any possible scandal for weak and unformed consciences: Beware lest freedom be a cause of stumbling for the weak. We have a great influence on others, and this influence must always be for the good of those who see or hear us, in whatever situation we find ourselves.

The Lord preached his doctrine, even when some Pharisees were scandalized. It was then, as it often happens today, a false scandal, consisting in looking for contradictions or purely human criteria in order not to accept the truth: sometimes we find those who are "scandalized" because a married couple has been generous in the number of children, accepting with joy those that God has given them, and for living the demands of the Christian vocation with finesse.... Not infrequently the conduct of a Christian who wants to live the doctrine of the Lord in its integrity will clash with a pagan or frivolous environment and "scandalize" many. St. Peter, recalling some words of Isaiah, affirms that he is for many a stone of stumbling and a rock of scandal, as the old man Simeon had already prophesied to the Blessed Virgin. We should not be surprised if on some occasion something similar happens in our lives. However, those occasions which are indifferent in themselves, but which can produce strangeness and even real scandal in other people, because of their lack of formation or their way of thinking, we should avoid them out of charity. The Lord gave us an example when He ordered Peter to pay the Temple tax, to which He was not obliged, so as not to disconcert the collectors, since they knew that Jesus was an exemplary Israelite in everything. We will not lack occasions to imitate the Master. "I do not doubt your uprightness. -I know that you work in the presence of God. But there is a but: your actions are witnessed or may be witnessed by men who judge humanly..... And it is necessary to give them a good example.

Particularly serious is the scandal that comes from those who enjoy some kind of authority or renown: parents, educators, rulers, writers, artists... and those who are responsible for the formation of others. If simple people live in lukewarmness," comments St. John of Avila, "it is a bad thing; but their evil has a remedy, and they only harm themselves; but if the teachers are lukewarm, then the woe of the Lord is fulfilled for the world, because of the great evil that comes to them from this lukewarmness; and the woe that threatens lukewarm teachers, who attach their lukewarmness to others and even extinguish their fervor ".

The Lord's words remind us to be attentive to the consequences of our words. "Do you know the harm you can cause by throwing away a stone if you are blindfolded?

"You do not even know the harm that you can cause, sometimes serious, when you utter murmuring phrases, which seem to you to be very light, because your eyes are blindfolded due to lack of understanding or because you are overheated". And we must always be careful of our actions so that, by unconsciousness or frivolity, we never do evil to anyone.

He who is the occasion of scandal is obliged, out of charity, and sometimes out of justice, to repair the spiritual and even material damage caused. Public scandal calls for public reparation. And in the face of the impossibility of an adequate reparation, there remains the obligation, always possible, to compensate with prayer and penance. Charity, moved by contrition, always finds the right way to repair the damage.

This passage from the Gospel can help us to say to the Lord: Forgive me, Lord, if in any way, even without realizing it, I have been a cause of stumbling to anyone! These are the hidden sins, for which we can also ask forgiveness in Confession; and so that the Lord's words, walk circumspectly, help us to be vigilant and prudent.