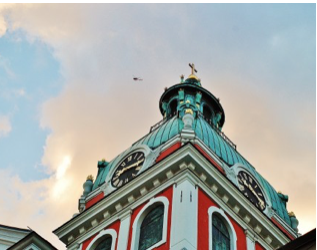 In his writings, St. Paul refers to the fundamental event of his life, which we read in the First Reading of the Mass. It would remain engraved forever in his soul: As he was on his way, it happened that, as he approached Damascus, he was surrounded by a light from heaven. And as he fell to the ground, he heard a voice saying, "Saul, why do you persecute me? He answered, "Who are you, Lord? And he said, "I am Jesus whom you are persecuting. In this first revelation, Jesus shows himself personally and intimately united to his disciples, whom Paul was persecuting.

Later, in the doctrine of the Mystical Body of Christ, one of the central themes of his preaching, he will show this profound union of Christians among themselves, because they are united to the Head, Christ: if one member suffers, all the members suffer with it; and if one member is honored, all the others rejoice with it.

This unshakable faith in the union of the faithful among themselves led the Apostle to ask for prayers from the first Christians in Rome, whom he did not yet know personally, so that he would be well rid of the unbelievers he was to meet in Judea. He felt very close to his brothers in the faith, whom he called saints in his letters: Paul and Timothy, servants of Jesus Christ, to all the saints in Christ Jesus, who are in Philippi4. From the earliest times of the Church, Christians, in praying the Apostolic Symbol, have professed as one of the principal truths of the faith: I believe in the Communion of Saints. It consists of a community of spiritual goods from which all benefit. It is not a sharing of goods of this world, material, cultural, artistic, but a community of imperishable goods, with which we can give each other incalculable help. Today, by offering to the Lord our work, our prayer, our joy and our difficulties, we can do much good to people who are far from us and to the whole Church.

"Live a particular Communion of Saints: and each one will feel, at the hour of interior struggle, the same as at the hour of professional work, the joy and strength of not being alone." St. Teresa, aware of the ravages of Protestant errors within the Church, also knew of this support that we can give each other: "Because the things of the service of God are already so meager," said the Saint, "that it is necessary for those who serve Him to have each other's backs in order to go forward," and this doctrine was always lived in the bosom of the Church.

"What does the Communion of Saints mean to me? It means that all of us who are united in Christ - the saints in Heaven, the souls in Purgatory and those of us still living on earth - must be aware of the needs of others.

"The saints in Heaven (...) must love the souls that Jesus loves, and the love they have for the souls in Purgatory and those on earth is not a passive love. The saints long to help those souls on their way to glory, whose infinite value they are able to appreciate now as they could not before. And if the prayer of a good man of earth can move God, what will be the force of the prayers that the saints offer for us! They are God's heroes, his intimate friends, his relatives."